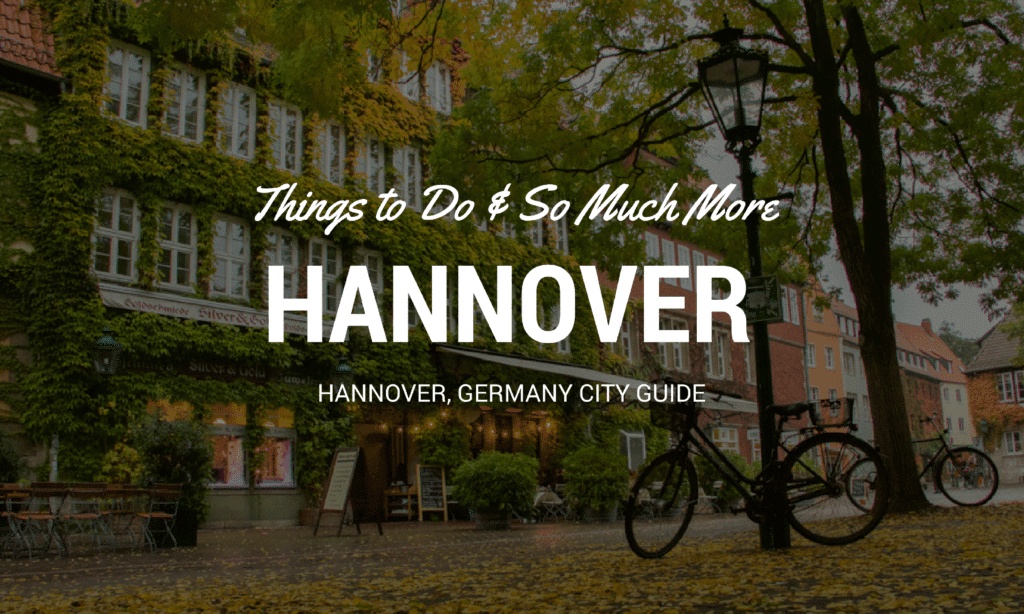 Disclosure: This Hannover Guide contains affiliate links. That means we earn a commission when you use the links on this site to book a hotel, buy your travel insurance, etc.. You don’t pay anything extra. If you’d like to learn more about how this works, you can read more under our Disclaimer page.

Hannover, Germany isn’t on many people’s travel radar, and after spending a couple days there this autumn, I can confidently say that’s a shame.

Four hours from Amsterdam on a train, and less than two hours to Berlin, Hannover is a perfect stopover city: walkable and easy to navigate; great public transportation for the few sights that are outside the central core; interesting history (Queen Victoria was the last British Monarch from the House of Hanover); and plenty of things to do in Hannover to keep you busy during a several days’ stay in the city.

If you’re travelling through the Benelux, northwest Germany, and Denmark region of Europe, consider a 1- to 2-day stopover in Hannover.

(And if you need some more ideas beyond our Hannover City Guide, our friend Kami recently went to Hannover, and posted about her favorite parts of her trip with this Things to Do in Hannover Guide!) 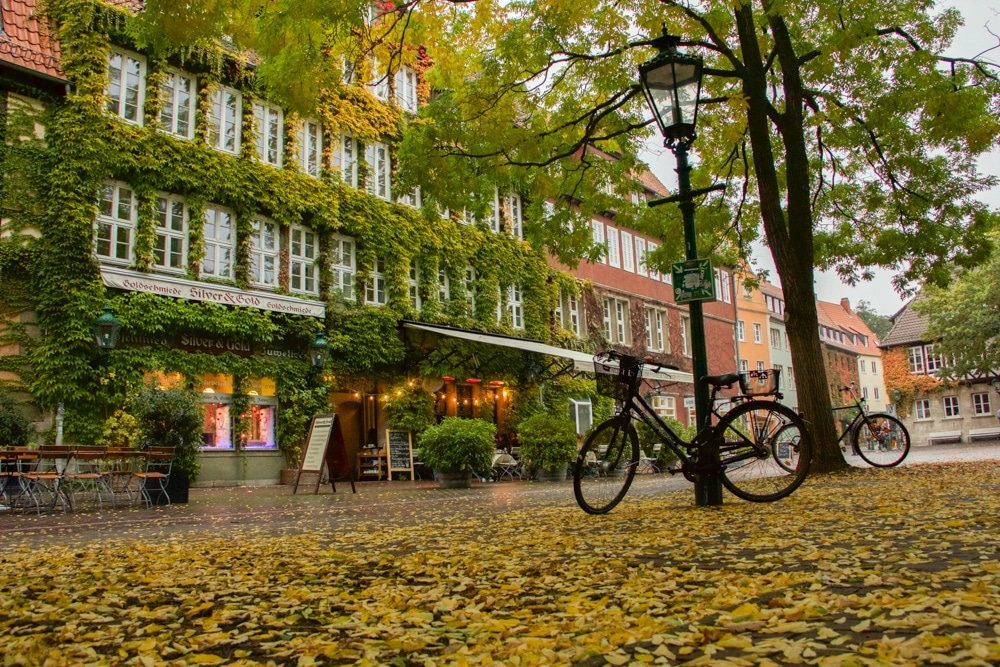 Walking up to New Town Hall, we were surprised as anyone to learn it’s not very new at all. Built in 1913, Hannover’s New Town Hall looks old to my Canadian eyes. Not old as in tired or dated, but old as in the majestic old architecture you expect when traveling around Europe.

The central copper dome is almost 100 meters high (328 feet), and one of the best things to do in Hannover is taking the arched elevator — it follows the course of the dome, changing angles as you travel up — to the top of Hannover New Town Hall.

When you arrive to the top, you’re treated to 360-degree views of Hannover and the manmade Maschsee, an artificial lake that is the place to be in the summer months, and offers awesome views year-round…even in the fog! 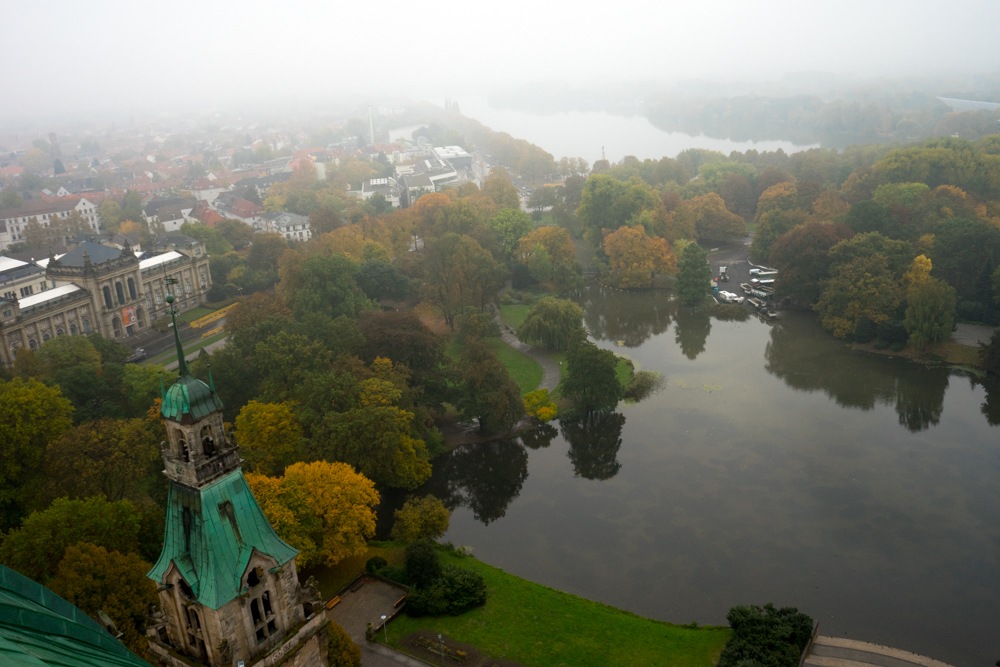 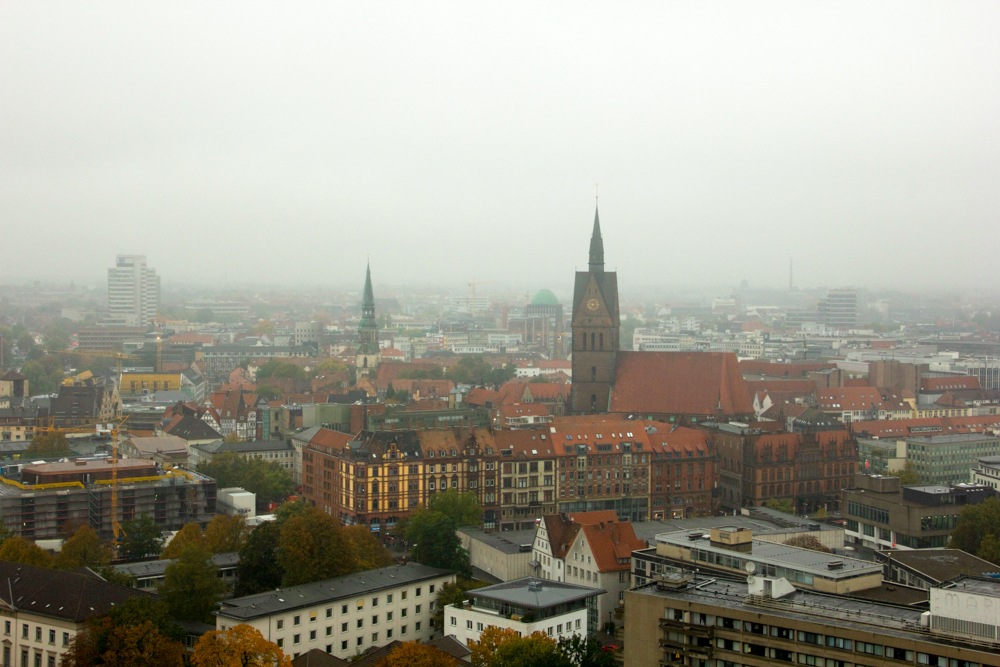 The view behind Hannover’s New Town Hall is just as nice as the view from up top: surrounded by a large park that is a popular picnic and drinking spot in the summer, the Masch Pond reflects the New Town Hall in a watery mirror. Grabbing a reflection shot of New Town Hall from the back of the building is one of the best photo opportunities in Hannover.

If you stand on the bridge to get a straight-on view of the New Town Hall and look really hard, you’ll notice there are quite a few asymmetrical differences between the right and left sides of the building: missing dormer windows here, missing towers there.

These are scars from the war, when Hannover was nearly decimated and the New Town Hall took some significant hits from  the Allies’ bombing raids. After the war, the government repaired the damage, but didn’t replace those features that were eliminated: small reminders of the consequences of war. 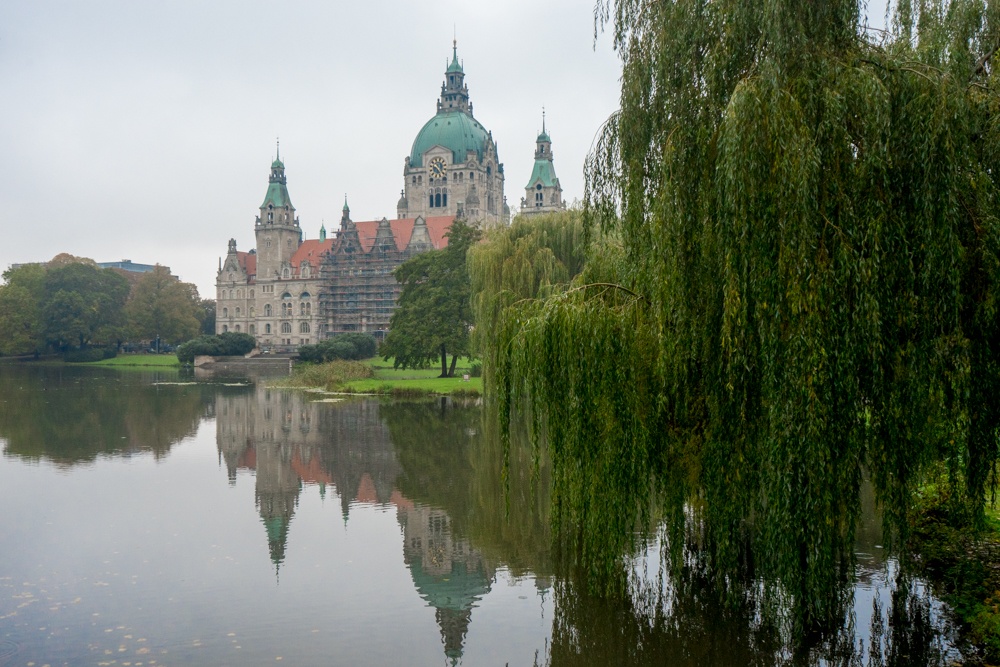 If you want to get a sense of the sheer magnitude of damage done during the WWII bombing raids, take a quick peek inside the main foyer at New Town Hall, where there are four models on display showing Hannover over the years: the first two show the progression of Hannover from the middle ages to just before WWII.

The third model shows the devastating damage done during the Allied bombing raids during the war (pictured below). 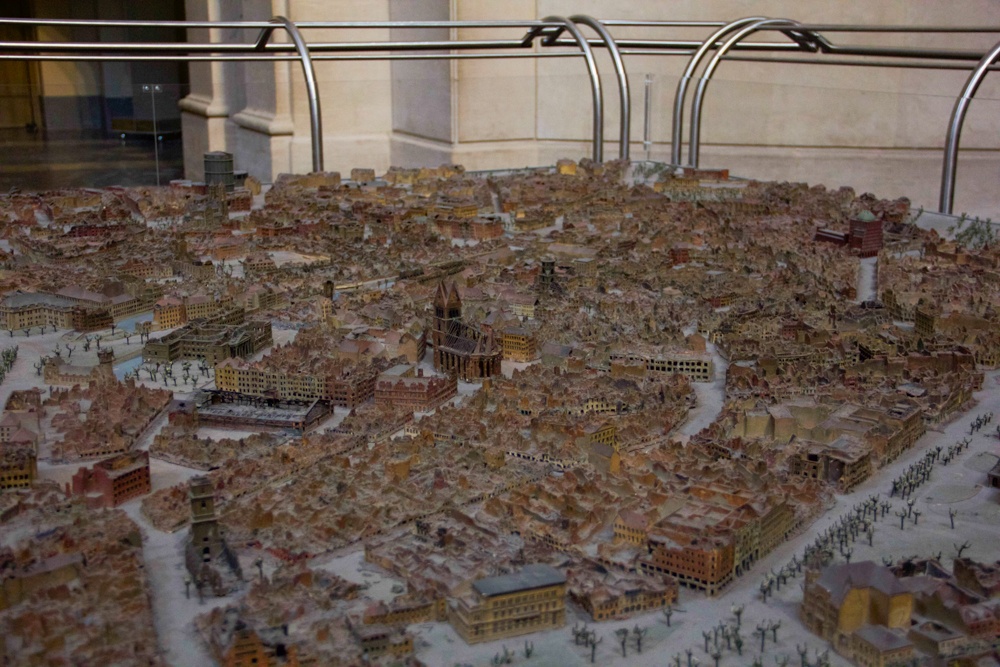 The Red Thread is a brilliant idea, and I wish more cities would adopt it. It’s actually a painted red line in Hannover’s city centre that will take you past 36 of the city’s best attractions. At each attraction, there’s a number painted on the thread that corresponds to a number in Hannover Tourism’s Red Thread Guidebook, which you can pick up for €3 in the tourism office near the train station, or buy as an app for OS devices (sorry Android).

Some of the stops are admittedly a bit of a stretch (see stop #2: a shopping centre opened in 1987), but for the most part following the Red Thread is an excellent way to see some of Hannover’s best sights in a short time: the Opera House, Old Town, the Aegidienkirche, the New Town Hall, and some interesting statues, architecture, museums and churches. 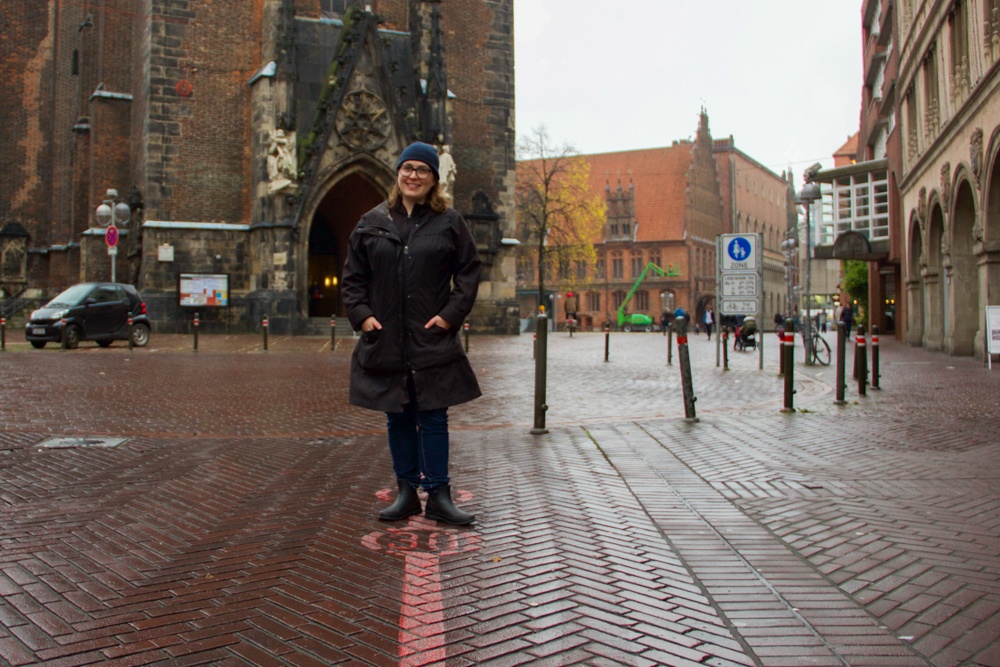 Let’s just start with being crystal clear about one point: I don’t understand math. So if you’re looking for someone to explain what binary is, best to move along.

The best I can do is tell you that the guy who invented modern binary — the magical number system that made computers possible — did so in Hannover. Gottfried Wilhelm Leibniz also invented the calculator, and made significant contributions to calculus.

In Hannover, you can see a monument honouring Leibniz (pictured below – find it near the Opera House), as well as a replica of his former house, known as the Leibnizhaus, at Holzmarkt 4-6 in Old Town. 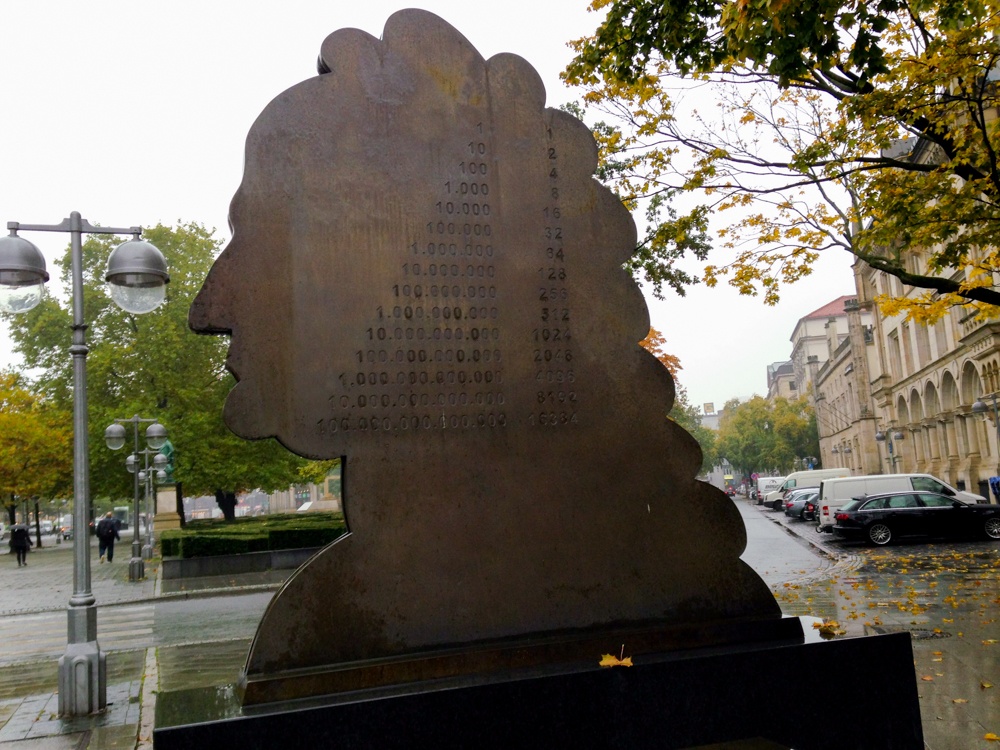 Check Out the Mish-Mash Old Town

This is actually pretty cool.

After Hannover was largely destroyed during the second world war, only 40 half-timber gingerbread-looking buildings survived. Rather than keep them where they were, scattered about the town in no real pattern, the government opted to move all the surviving buildings (mostly facades) together to re-create the Old Town.

What the Old Town lacks in size, it makes up for in a cozy sort of charm. Old Town is the perfect spot to grab a coffee during the day, or a German beer at night. 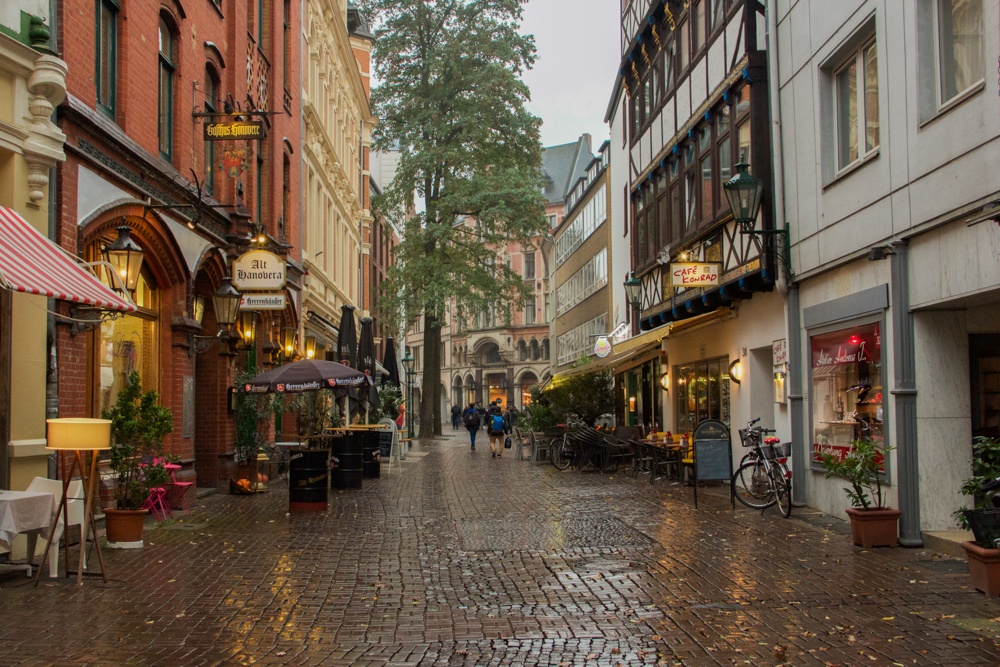 Make a Wish on the Wishing Lock

Some cultures have wishing wells, Hannover has a wishing lock.

In the centre of the Old Town, the wishing lock is a magical combination lock where you can try to guess the combination while making a wish. If you guess correctly, your wish will be granted.

On football (soccer) game days, fans line up at the wishing lock and coordinate their guesses to maximize the chance of guessing right. 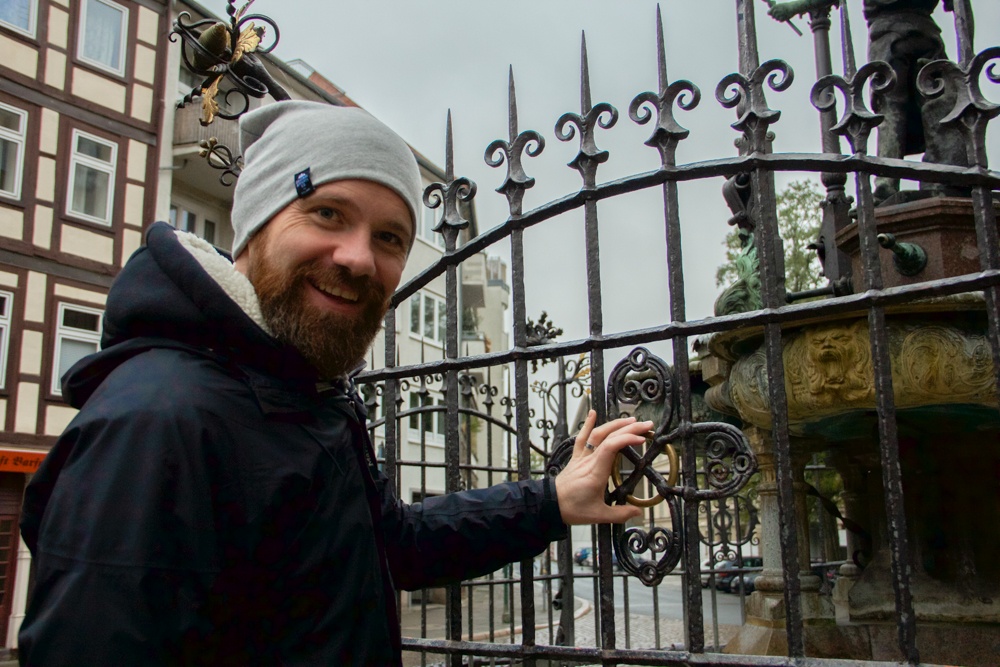 Check Out the Doors on Market Church

Needless to say, it’s unusual to see a church with symbols of war, death and Naziism on its front doors, which is one of the things that makes the Market Church in Hannover’s Old Town so interesting.

The iron exterior doors are decorated with scenes from WWII that show women running from their bombed-out and burning homes, people saluting Hitler, executions, and graves to bury the dead. The doors also show scenes of getting back to normal.

We really appreciated how Hannover has embedded small reminders of WWII in its everyday life, and thought it was an effective alternative (or maybe, addition) to the large monuments you find in other parts of Europe. 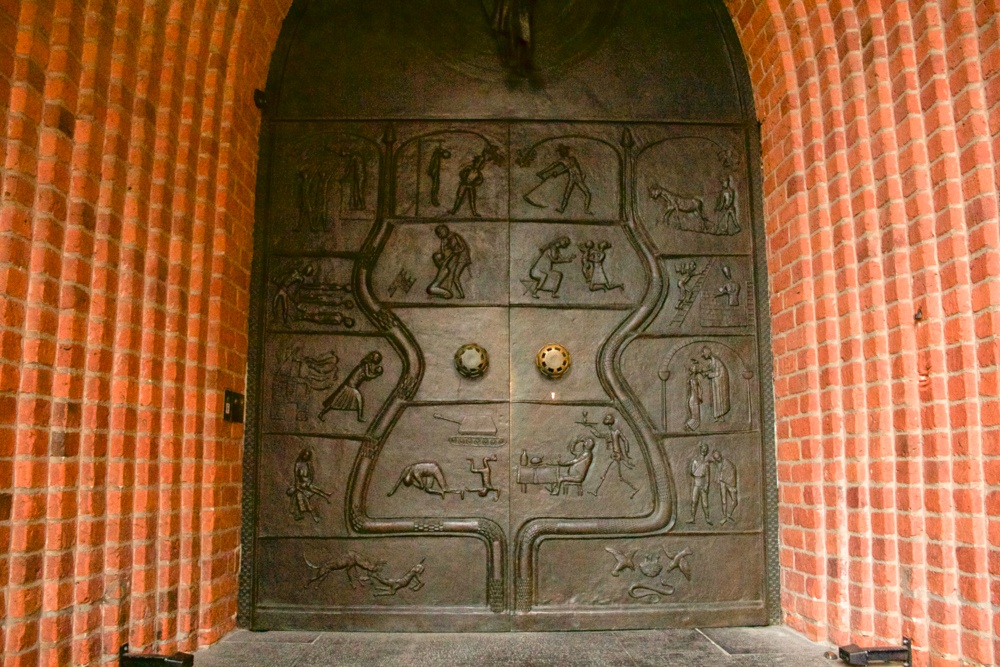 A rickshaw tour through the city centre is a short and sweet alternative to the red thread.

Expect a ‘highlights reel’ of Hannover, passing the main highlights with a local guide who will give you the quick and dirty of the best the city has to offer.

We took a rickshaw tour, and we loved it. Our guide Hardy was funny, knowledgeable, and had a genuine love for Hannover and its quirks and history. The tours last about one hour (shorter in winter, when you’ll get a blanket and hot chocolate to numb the cold), and will drop you off at your hotel or any other spot in the city centre (we got dropped at the Market Hall for lunch!).

Wander Through the Royal Gardens of Herrenhausen

A couple of tram stops from the centre and you’ll find yourself at the Herrenhausen Gardens, the former Royal gardens that King George the I (of England) spent his childhood as a member of the House of Hanover.

Reminiscent of the most famous European palace gardens — think Schönbrunn in Vienna, or Versailles outside Paris — the baroque Herrenhausen Gardens are a nice spot to spend a few hours walking and chatting, much as the Royal Court of Hanover did back in the day. 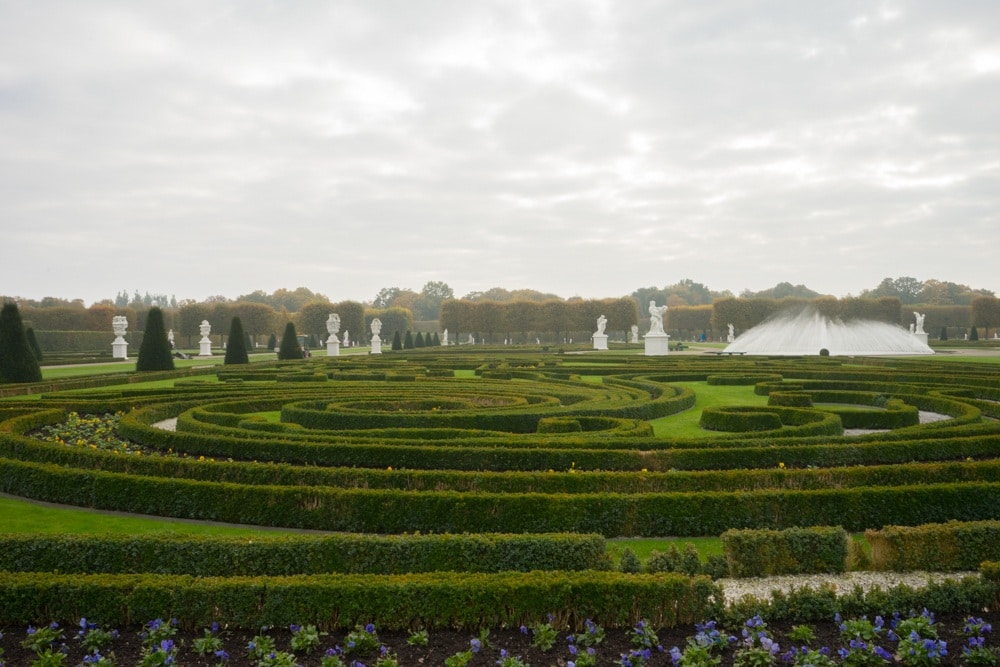 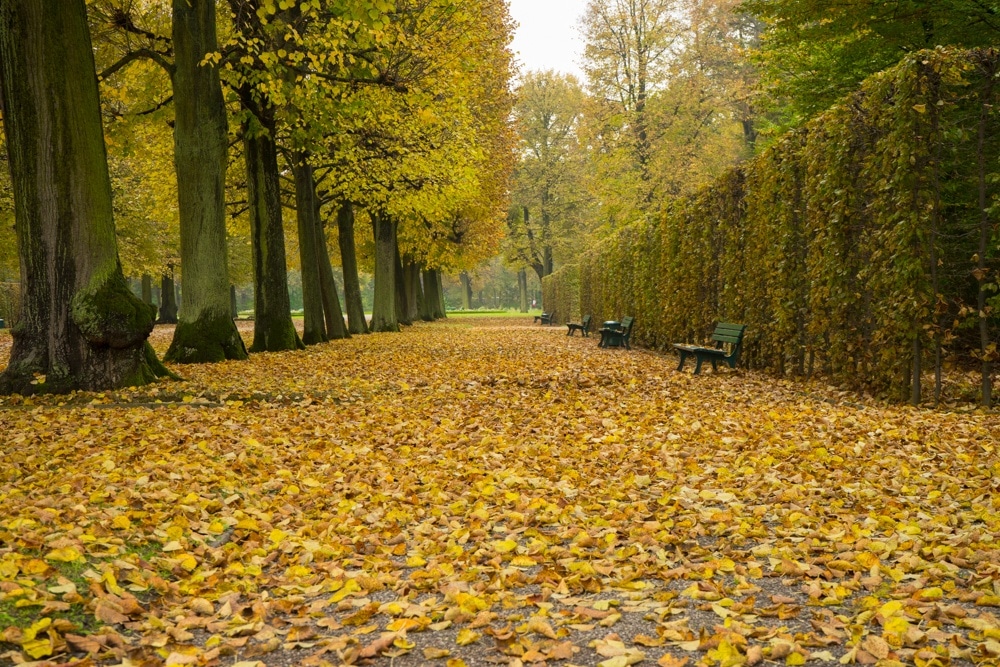 Chillax at the Maschsee

This is one thing we didn’t get to do during our trip to Hannover due to weather. While October is usually a lovely time in the city, we were plagued by unseasonably cold weather and rain. However, we were told the Maschsee is the place to be in nice weather, and plays host to a number of events and festivals each summer.

Hardy, our rickshaw driver and tour guide, also told us a great story about the Maschsee’s creation (it’s an artificial lake).

While city officials had talked about creating it for decades, it was ultimately approved as a Nazi-led jobs creation scheme in the 1930s.

One day, Hardy was on a Rickshaw tour with an older German couple. They asked him to take them to a specific part of the bank around the Maschsee and when they arrived, pointed at the spot and said, “that’s ours…we dug out that section!”

They were two of the 1,650 people involved in the construction of the lake, hand-digging out a specific section. 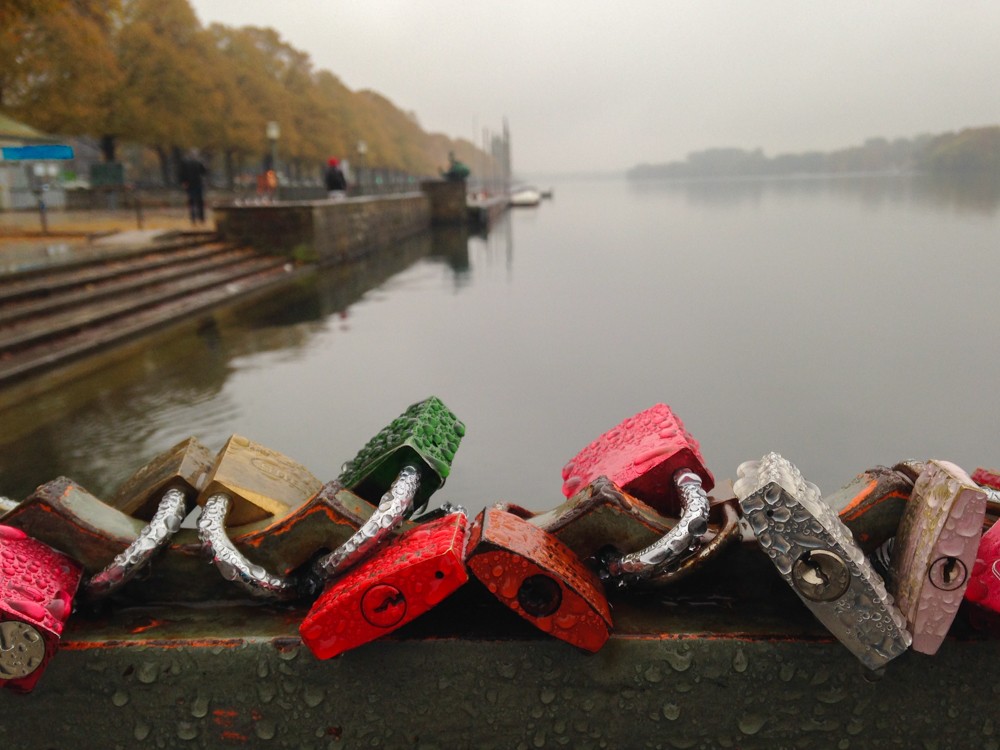 Take a Brief Dance Break at the Singing Sewer

So….Hannover has a singing sewer. And it’s as random as it sounds.

It was installed for the World’s Fair hosted in Hannover in 2000, and ever since, an anonymous Hanoverian has taken over maintenance of the sewer’s musical stylings, and keeps it going.

The sewer is just across from the Train Station, near the main tourism office. Walk slowly, and listen, and you’ll find it. The music changes once a month, and apparently you can request songs! 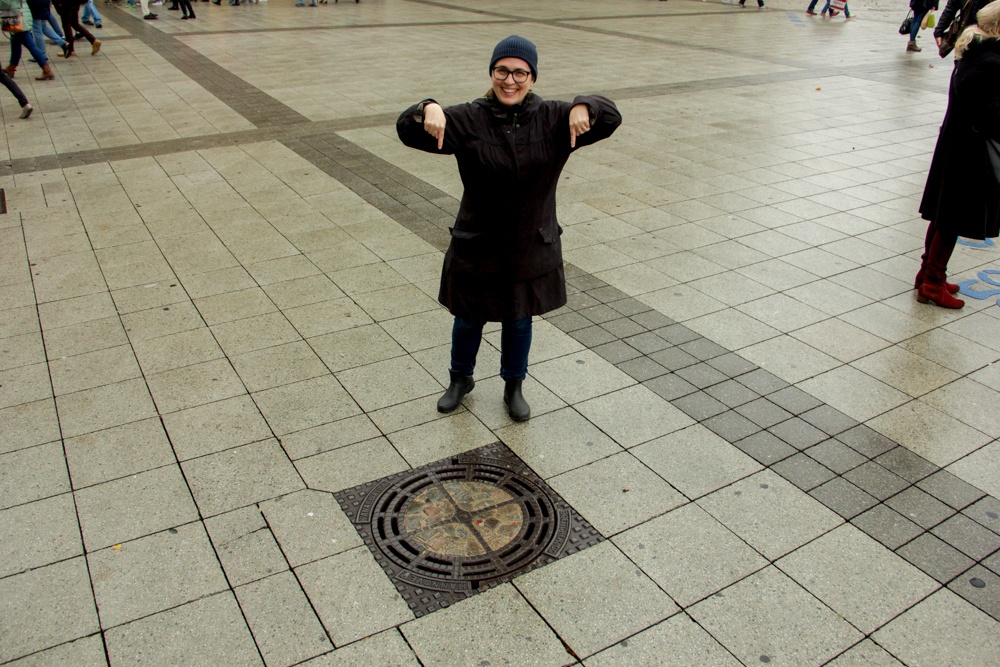 Arriving in Hannover via Plane, Train or Bus & Getting Around

The best bet to get into the centre from the airport is to take the S-Bahn train. It runs almost 24 hours a day, from 03:35 to 01:05 from Terminal C and takes less than 20 minutes to the centre. The train station and bus station in Hannover is right in the centre, and is connected via tram and metro.

Once you’re in the centre, Hannover is mostly walkable, with the metro and tram convenient to use if you want to go to an attraction further out, like Herrenhausen Gardens.

Where to Stay in Hannover

Stay in the old town or city centre, or as close as you can. Much of the centre is pedestrianized, making it great for strolling and exploring the city.

Did You Know? Hotel referrals are a primary source of income for this website. By making your hotel bookings using the links in this website, you support our continued efforts to bring you the best travel information. It’s as easy as booking your hotel through Booking.com, Hotels.com, Hotels Combined or TripAdvisor … and it doesn’t cost you anything extra! 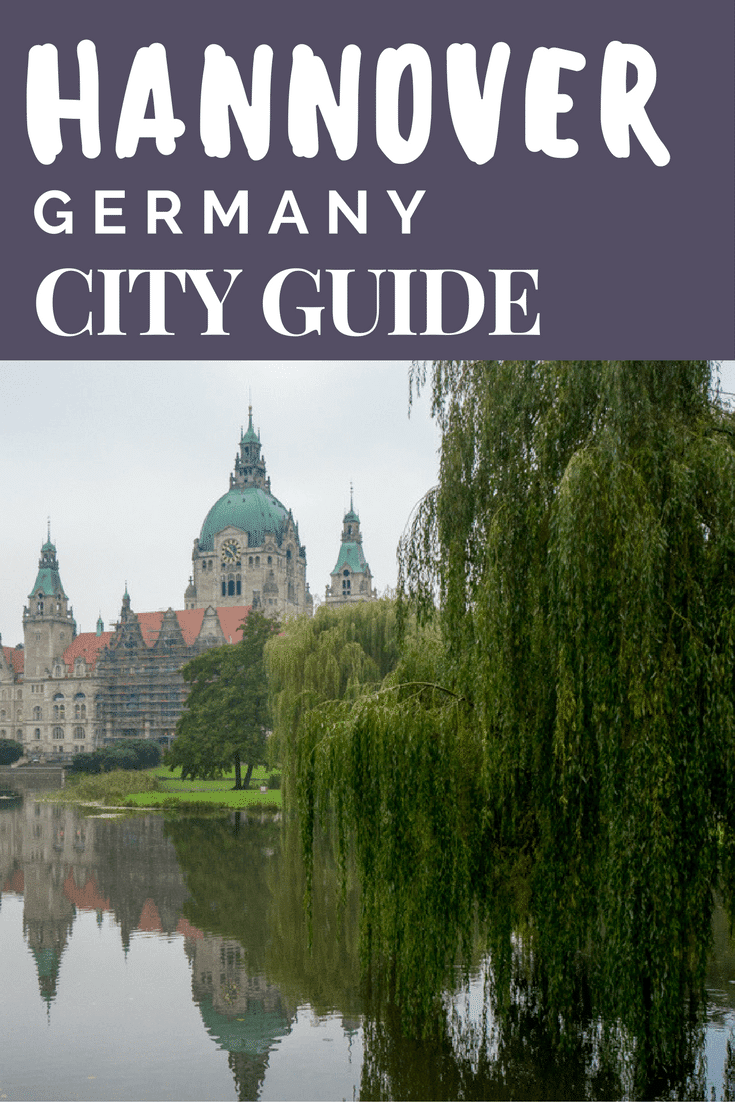 We hoped you enjoyed our Hannover City Guide: The best things to do in Hannover, Germany, plus practical travel info and Hannover travel tips.

If you have any questions, as always get in touch with us on our Facebook page, or send us an email [wandertooth at gmail dot com]

5 thoughts on “Hannover, Germany City Guide: The Best Things to do in Hannover”