Disclosure: This Nazca Lines Peru post contains affiliate links. That means we earn a commission when you use the links on this site to book a hotel, buy your travel insurance, shop for travel essentials, etc.. You don’t pay anything extra. If you’d like to learn more about how this works, you can read more under our Disclaimer page.

In the late 1930’s and early 1940’s when commercial air travel was becoming more and more frequent, the world was being treated to another view of itself.  Ariel views of the world continue to captivate us ‘earth-walkers’ today but at that time, it all must have seemed so foreign.  Pilots flying over Peru’s desert region began reporting strange images and markings carved into the rough, wind swept crust.  This region however was quite remote and information traveled slow from this part of the world.  Eventually, scholars of all kinds descended upon the puzzling Nazca Lines to try and figure out what they meant and why they were made, while some tried to figure out how they were made.  Simply walking on the desert floor, one certainly lacks the vantage point that you get from the air or at least, a hill, which adds another element of mystery.  An example here is the Peru portion of the Pan-American Highway was built straight through the middle of a couple of them, and they didn’t even know they were there.  Did the ancient Nazca people have the ability to fly?

These scholars do agree on dating the creation of the Nazca Lines to between the fifth and seventh centuries AD.  Some of the lines are straight, like ‘ruler’ straight, and they go on for hundreds of metres and all seem to point to something, but what?  There are a few conflicting theories and one is that, as this area consists today of dry river beds, they were pointing to water sources, another is something celestial, another even describes them as a landing strip for alien aircraft.  Whatever theory you believe, it is a head-scratcher as how anyone could do something so precise with such primitive tools in such a harsh climate. 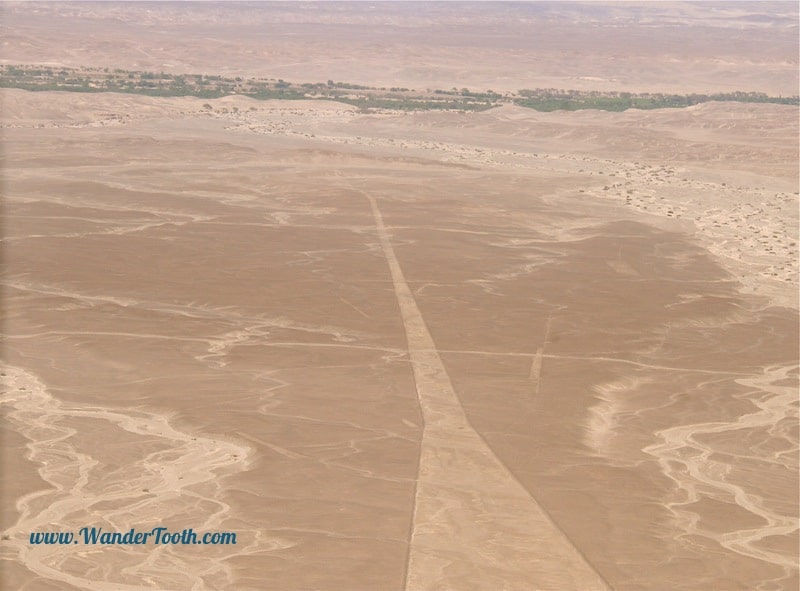 An alien landing strip on the Nazca Desert?

Straight lines you say?  Big deal, so what?  Well it gets better and even more mysterious.  What would you say if you were looking down at this desert, one of the driest on the planet, and see a geoglyph of a giant spider, perfectly preserved, carved into the surface.  Hey? What then?  How about a monkey, a pelican, or a condor over a 130 meters tall?  Or a whale? 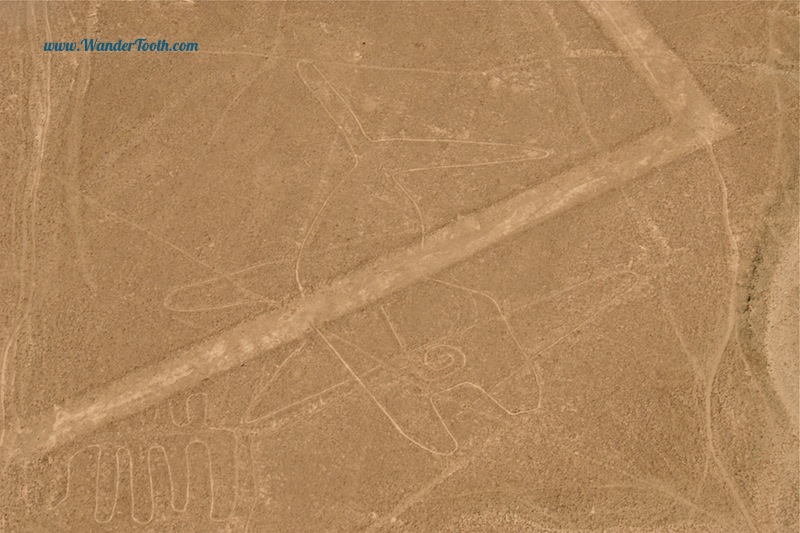 Answer me this, how did someone in say, the fifth century, know what a whale looked like? And even if he did know (I am assuming he, maybe a she, or an it, who knows?), how and why would he carry that image in his head back to the desert and carve it, from memory, free hand, into the rocky surface to the tune of say 40 meters wide, and what? keep running up to the nearest hill top to check his work? The alien theory is starting to become the most believable theory isn’t it?

Based in Lima and Still want to visit the Nazca Lines of Peru?

No Worries! If you want to visit the Peru Nazca Lines from Lima, take an organized tour. Take a comfortable bus to and from Nazca, have a flyover of the Nazca Lines, have lunch, then return to Lima. All in a day! 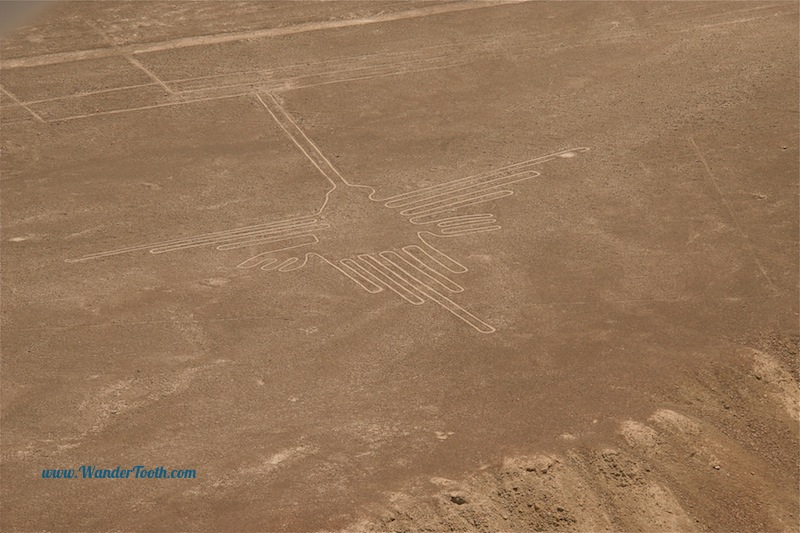 One of my favorites – The Humming Bird.

There are so many baffling images here from flowers and trees, to fish and forest animals but perhaps the freakiest of all is the ‘Owl Man.’ So called because the image looks like a man but with an owl’s head. It’s possible that the artist intended to draw a human, or, maybe the artist was an alien drawing a self portrait, and the image is quite accurate? Hmmmm, perhaps it’s the other way around, perhaps the humans were communicating to the aliens, drawing pictures of of the different lifeforms we have here on earth. Makes sense, right? 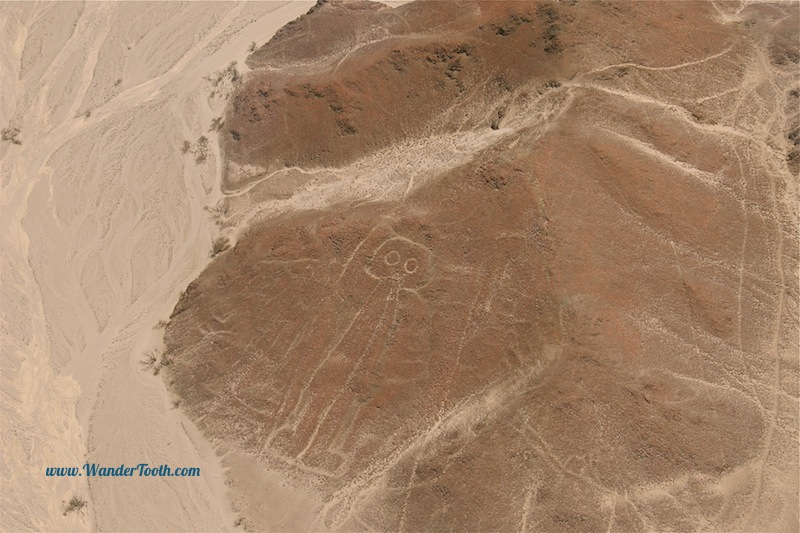 From the town of Nazca, you can either book a land tour of the the Nazca Lines, or an ariel tour and either one will see you likely gravitate towards one of the many theories, or maybe make your own.  If you are inclined to remain on the ground, you won’t see as many, as the geoglyphs are found in a area of almost 500 square kilometres, but you’ll see some of the main ones.  For tourists, they have built some staircases with a viewing platform on top in some of the more strategic places, and you will be with a knowledgable guide and group.  If you are up for an adventure, you can book a 30-45 minute flyover.  Your pilot will take a very small group of about 4 or 5 people, and circle around for great photo opportunities.  Be warned, this is not a smooth flight and the turns are sharp but if you think you can stomach it, it’s well worth it.

Often when people mention Peru, images of lush rainforest and the postcard perfect Inca trail and the mysterious wonder that is Machu Pichu. The images that don’t come to mind are that of desert. But even here, there are things not to be missed.

Have you been to the Nazca Lines? Were these stoned shamans on an acid trip that have made these from their ‘dream state?’ Was it an alien landing site?  Was it them communicating with us, or visa versa? Why then are they made so they can only be viewed from an elevation? Describe your theory in the comments!

Book Your Very Own Nazca Lines Peru Fly Over

Experience a bird’s eye view flying for 30 minutes above one of the great creations of the ancient world, the Nazca Lines, on this tour. Learn the fascinating myths about the creation of this UNESCO World Heritage site, unexplained by scientists and archaeologists to this day. With window seats guaranteed, this flight features informative commentary from your pilot as you fly over the Nazca Lines.

Where to Stay in Nazca