After spending 4 months in Oaxaca before coming over to Mexico’s Yucatan peninsula, we’ve come to appreciate Mexican food is nothing, if not diverse. I arrived in Valladolid Mexico, a small, colonial city about 2 hours in either direction from Merida and Cancun, with an appetite, and set out to eat all the things I could during our 3-day visit. Being the half way point between the two cities, it tends to land on many Yucatan itineraries, whether you’re backpacking in Mexico, staying at a resort, or on a grand Mexican adventure.

Here are my picks for a few uniquely Yucatecan eats and treats to try while in Valladolid Mexico.

Yes, you read that correctly…I’m recommending a tuber-based margarita, created with “Mexican turnip” as the main flavour.

Despite the need to up it’s marketing game beyond “turnip margarita,” the jicama Margarita from Restaurante El Meson del Marques offers up a hit of creamy, refreshing, and boozy goodness, with the added benefit of feeling somewhat healthy to boot (if you’re willing to pretend away the tequila and sugar).

Jicama, if case you’re not familiar with it, is a tuberous root similar to a potato or turnip. It’s ubiquitous across Mexico, often sold freshly cut into sticks or cubes by street vendors, and served in plastic bags sprinkled with chilli powder. When eaten fresh, it has the crispness of a raw potato, and tastes (to me) like a strange hybrid between  green apples and cucumbers.

When our friend Seth, who runs Everything Playa Del Carmen, found out we were going to Valladolid, the jicama margarita at Restaurante El Meson del Marques was one of the first things he recommended, and we’re glad he did, as we probably wouldn’t have found it without his heads-up.

I really didn’t know what to expect, but it was a surprise hit, with the jicama adding a subtle taste and layers of texture: it was creamier, thicker and frothier than a normal margarita, with a satisfying starchiness.

Where to Get it in Valladolid Mexico: On the north side of Parque Francisco Canton, you’ll find Restaurante El Meson del Marques (Calle 39 No 203 x 40 y 42), a somewhat swish restaurant attached to a hotel. The restaurant has a nice garden atmosphere, specializing in Yucatecan food, and there’s a small, poolside bar out back. You can get the margarita in both the restaurant and the bar.

The Yucatan’s answer to hummus, it looks like a darker version of its middle eastern cousin, taking on a reddish tinge from tomatoes.

Typically served with tortilla chips, it’s also delicious as a dip for fresh veggies if you make it at home. We had Sikil P’ak (sometimes written as zikilpak) in a few different spots around the Yucatan, and each time it was slightly different: spicy or not, with cilantro or without. In general, it has a creamy and nutty texture and taste. 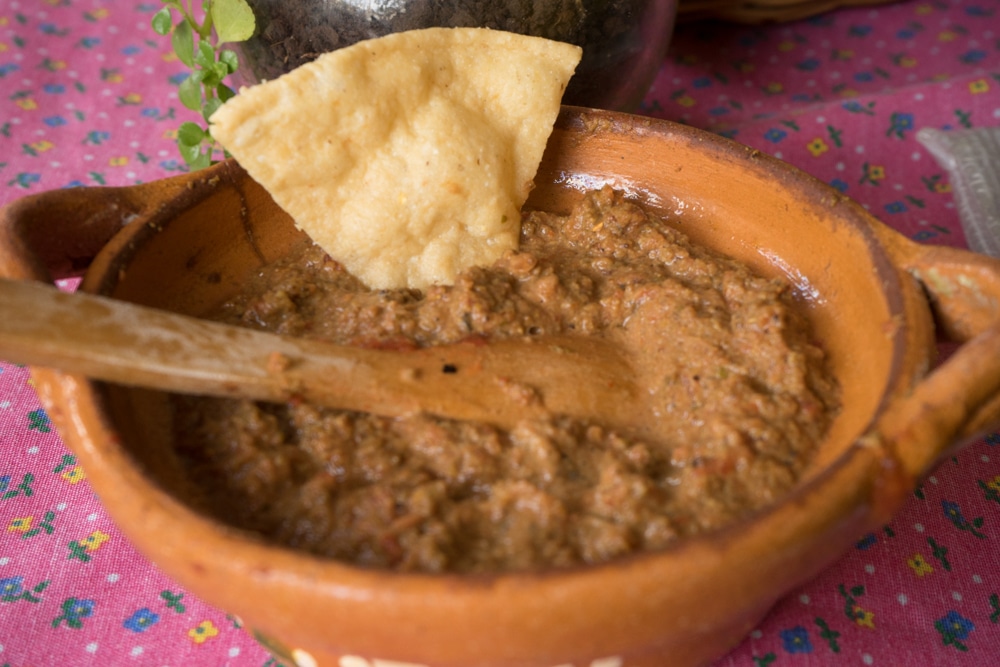 Where to Get it in Valladolid Mexico: Yerba Buena (Calle 54A – 217, X49 y 45, Col. Sisal) is directly across from the front entrance to the convent, and has a huge and healthy menu incorporating local ingredients. It closes at 5pm, so isn’t a great dinner option, unless you’re into earlybirding.

Chaya is a herbacious green used by Mayans and others in the Yucatan region for centuries. It looks a bit like a green maple leaf, has a taste I’d describe as “grassy,” and delivers a mean nutritional cocktail filled with iron, potassium and calcium.

It also seems to be having its day in the southern Mexican sun right now, as we found it pretty much everywhere we went in Valladolid: sautéed into Mayan eggs, cooked into stews and soups, served fresh as aguas chaya, and mixed in with fruit juice.

We had a refreshing chaya lemonade at Yerba Buena, after trying first (and failing – they were all out) to get a chaya-pineapple-orange juice at the mercado municipal.

Note that raw chaya has to be prepared properly, or you risk poisoning yourself with hydrocyanic acid. In other words, don’t try this at home. 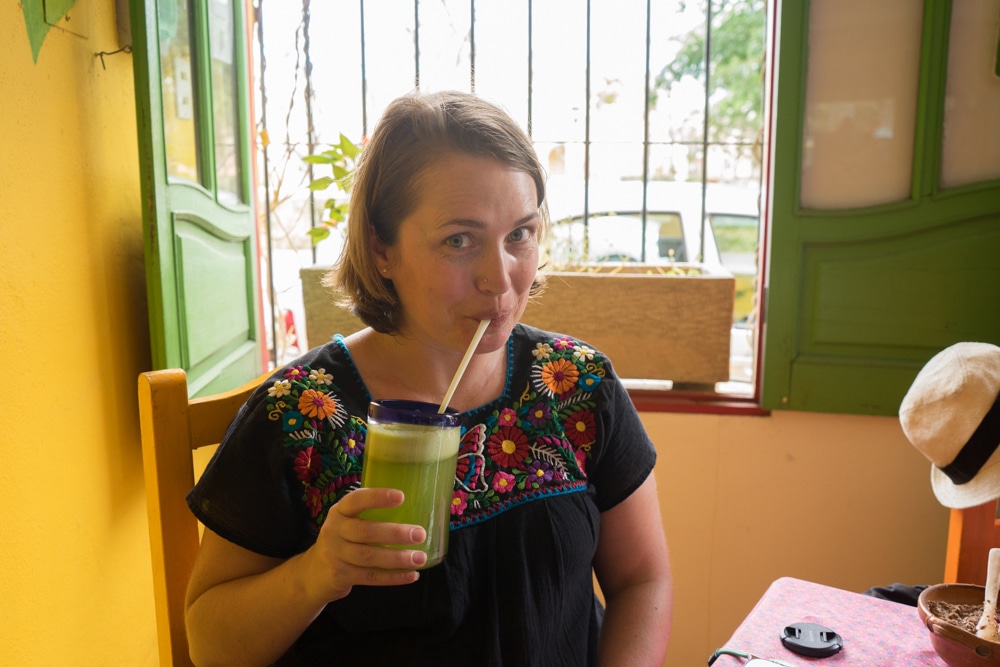 Where to Get it in Valladolid Mexico: We got ours at Yerba Buena (Calle 54A – 217, X49 y 45, Col. Sisal), the same spot with the Sikil P’ak across from the front entrance to the convent.

The Mercado Municipal (Calle 32 s/n between Calles 35 and 37) has a juice shop on the Calle 37 side. I tried to order a Jugo Zaci (pineapple, orange, and chaya), but they were all out. Hopefully you have better luck!

The restaurant Taberna de los Frailes (Calle 49 x 41A…beside the convent) was also recommended to us as a great spot for Yucatecan food — we never made it there, but heard the soup of Mayan greens is worth trying.

This was my greatest food disappointment in Valladolid, as every ice cream shop we visited in search of mame ice cream was out that day.

Mame fruit (also called sapote or zapote, and pronounced ma-may) has a sweet and creamy taste and texture that is apparently a mashup of almond, pumpkin, cherry, chocolate, vanilla and honey flavours, with a vibrant salmon pink interior (not to be confused with the black sapote, which tastes like chocolate pudding),

We added it to smoothies when we were staying near Progresso, but the flavour was lost to the other fruit, and I wanted to try it on its own in an ice cream. Unfortunately, I’ll have to keep looking (although I was happy to see mame shampoo in our Airbnb in Playa del Carmen!).

Where to Get it in Valladolid Mexico: Apparently, many of the ice cream shops in town often carry mame ice cream…we just had bad luck. There is an ice cream shop on the southeast corner of Parque Francisco Canton, as well as one along the western edge, that should offer a good starting point for your ice cream hunt.

If you’re looking for a hit of something sweet, and want to try something different, head to the Mercado Municipal. The market, which is definitely off the tourist trail, is just a few blocks from Zaci Cenote, and is an easy walk from Parque Francisco Canton.

On the outer part of the market (inside, but to the east of the meat hall), there are stalls upon stalls of mostly tiny ladies selling local sweets. At 153 cm (or about 5 feet), I’m rarely accused of being tall, but I felt like a gigante in Valladolid, frequently towering over many of the local women.

After perusing the options, we bought a few marzipan animals (So. Much. Sugar.), as well as a bag of yuca balls drizzled in honey.

Yuca is also known as cassava or manioc, and is yet another starchy root vegetable popular in the region. The balls consist of mashed and sweetened yuca root, formed into balls that look like doughnut holes (or Timbits, if you’re Canadian). They have a sweet, starchy taste and a doughy consistency, punctuated by stringy bits from the yuca root (imagine the stringy bits when you’re trying to cut ginger root). 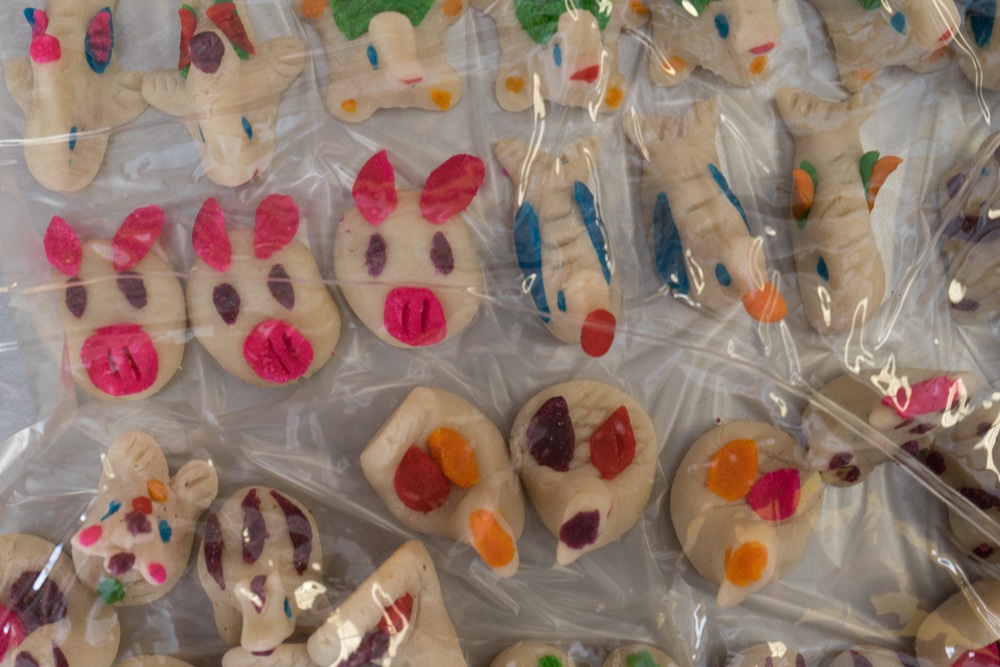 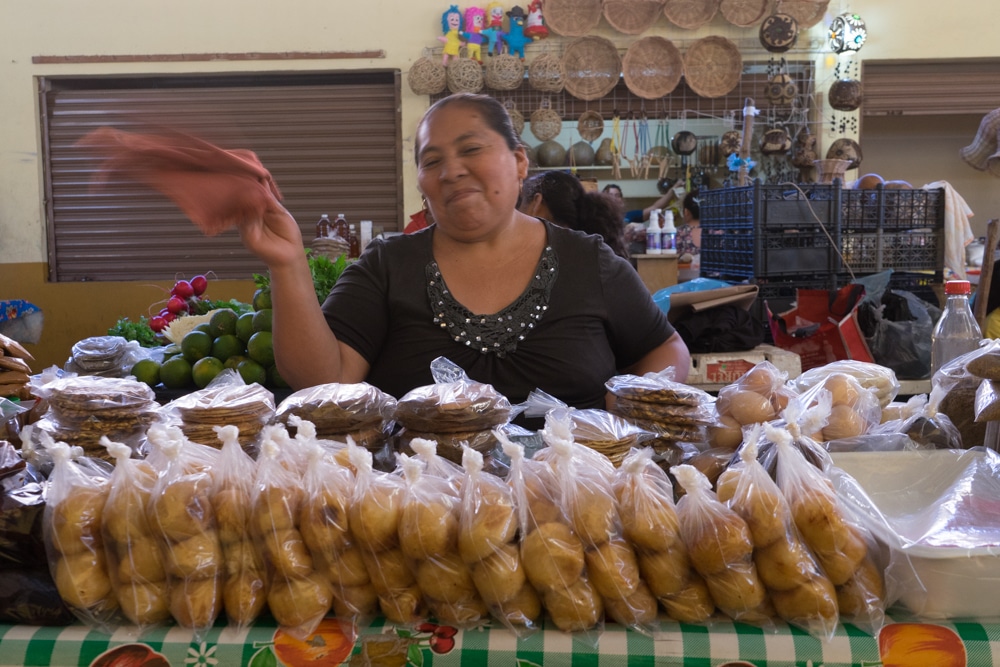 Where to Get it in Valladolid Mexico: The Mercado Municipal (Calle 32 s/n between Calles 35 and 37) is a 5 to 10 minute walk from the centre.

Marquesitas are a typical street-food desert in Valladolid and the Yucatan. In the evenings, you’ll find competing vendors setting up in squares or on peatonal walking streets, with line-ups of locals and tourists waiting their turn to order.

At first glance, a marquesita looks like a crepe. The batter is the same colour, and it’s poured onto a circular crepe griddle before being filled with treats of your choice — edam cheese seems to be typical, but you can also get cream cheese, jam, chocolate, etc.

That’s where the similarity ends. Once the filling is added, the marquesita is folded over on itself to make a long, rolled tube, and then placed between the griddle again to crisp.

The result is a crispy treat that’s sweeter and flakier than a crepe, and 100% delicious. 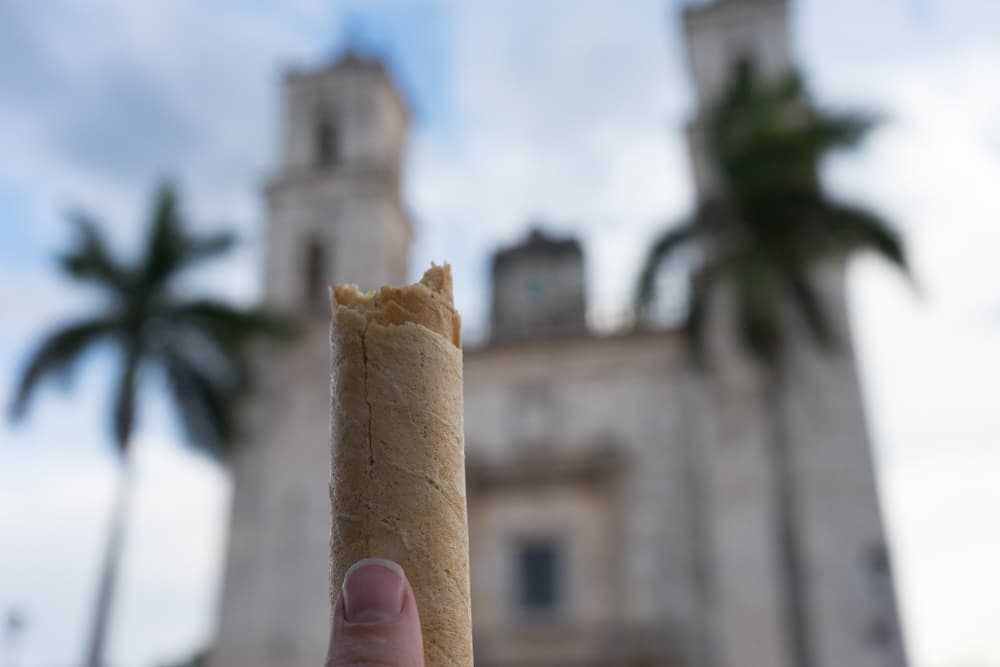 Where to Get it in Valladolid Mexico: Look for vendors setting up in the evening in Parque Francisco Canton, and find the one with the longest queue.

Our love for chocolate today was made possible by the ancient Mayans (see also: guacamole; coffee), so it makes sense to have a taste or eight in the Mayan people’s ancestral homeland.

On Calle De Los Frailes, the pretty and colourful diagonal street running towards the convent, there’s a small chocolate factory and café, Cacao.

Cacao doesn’t look like much from the outside, but has a free tour about the Mayan history of chocolate, including a free tasting of around eight different flavours, from the ancestral blend — chocolate as the ancient Mayans enjoyed it — to chocolate blended with tequila, sesame seeds, coffee, and honey, to name a few.

Attached to the museum is a small café, where you can order a bowl of Mayan chocolate drink. We both tried the ancestral blend, which is rich and spicy. 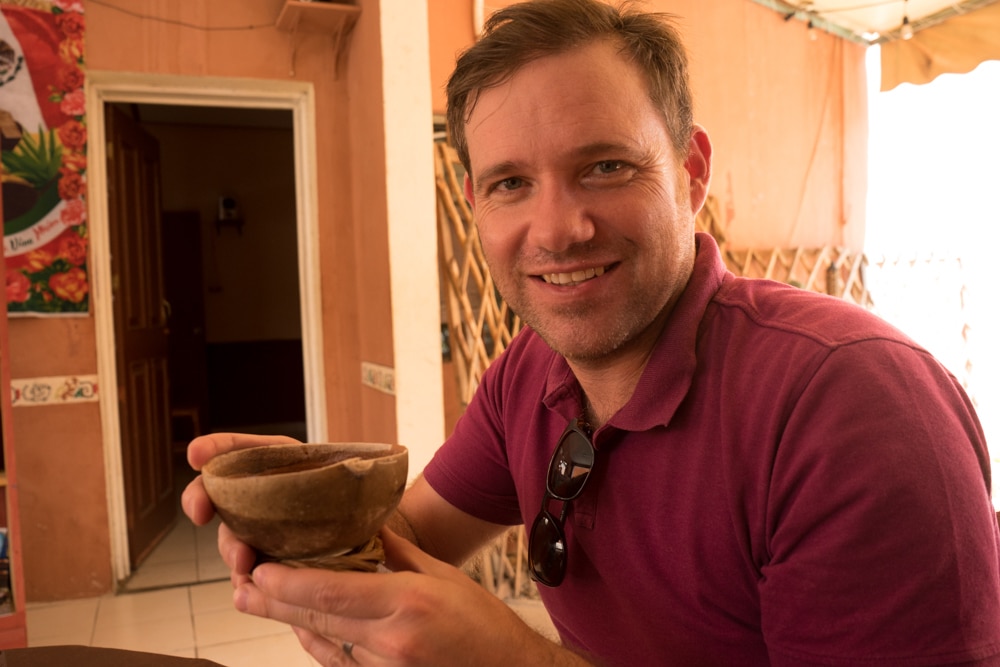 We found salbutes all over the Yucatan, and they’re seriously delicious (even Geoff, the pickiest of picky eaters, likes them).

Where to Get it in Valladolid Mexico: Restaurante El Meson del Marques (Calle 39 No 203 x 40 y 42) has Salbutes, as does (apparently) the Mercado Municipal.

With only three days in Valladolid Mexico, I didn’t manage to eat everything, of course, and missed out on some pillars of Yucatecan food, such as cochinita pibil, a pork dish flavoured with oranges and achitote, slow-cooked underground for hours, and El Bazaar Municipal, the open-air food court for cheap eats, next to El Meson del Marques.

What else did I miss?

Pin This for Later! 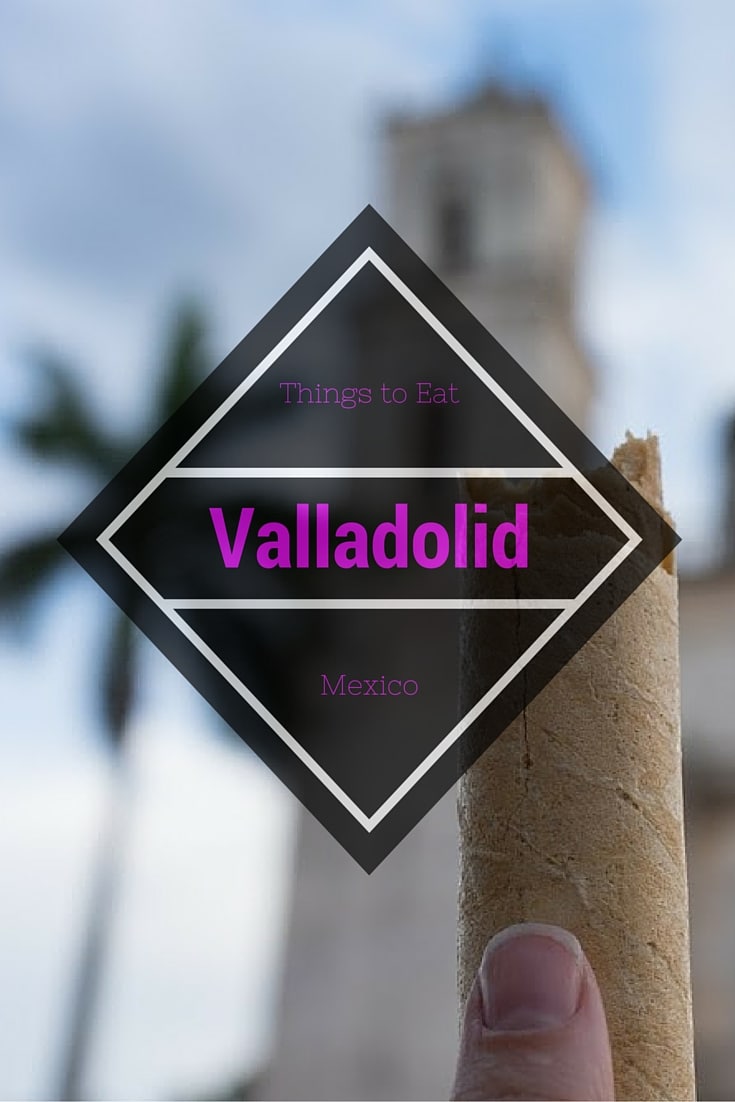 1 thought on “8 Nom Noms to Taste in Valladolid Mexico”