Happy Valentine’s Day! We don’t really celebrate Valentine’s — it’s just not our thang — but I am excited to say I contributed something to the Travel Underwriter’s blog to mark the occasion. The post highlights some of the buildings and monuments inspired by love around the world; I tried to include something for everyone, so you’re sure to find something to inspire you, whether you’re spending this V-day with your loving partner or plotting revenge against your evil ex. And with an introduction like that, I know you can’t help but be intrigued. So why don’t you head on over there right now, and I’ll wait until you’re finished reading.

Oh, you’re back? Excellent – what’d you think of Number #6? It was your favourite? Mine too! With that out of the way, we can now go back to regularly scheduled programming…

Once again, I’m running insanely behind in my writing, but I don’t want to jump ahead. So while Geoff and I explore Spain (we’re in Seville: the city of opera! Spoiler: we will not be attending the opera), the blog is still in southern Portugal. And today’s tale is of a place that turned out to be one of our favourite spots in Portugal: Sagres.

Sagres, Portugal, and nearby Cape St. Vincent, mark the southwestern-most point of continental Europe. It is an area rich with history, and in ancient times was thought to be the edge of the inhabited world. While that little tidbit is exciting enough on its own, apparently the ancients also believed the waters beyond Cape St. Vincent to be filled with seething sea serpents. Basically, they were scared of sailing beyond the Cape, lest they be eaten by a sinister, saltwater version of the Ogopogo. I know what you’re thinking: total. freaking. wimps. And also: What idiots! Everyone knows Ogopogos are, like, super friendly. But before we judge too harshly, let’s keep in mind they didn’t have Google back then, and likely had to rely on Ask Jeeves for answers to their most pressing questions.

Having never been to the end of the world before, we were particularly excited. Especially since we would be traveling there in our Nissan Micra; after all, nothing says “adventure to the end of the world” than a compact Japanese rental car. And so it was with high hopes that we set out one morning from the lush, orange-grove dotted landscape of the central Algarve, and drove west.

The nice thing about travel throughout the Algarve is that pretty much everywhere can be reached as a day trip if you base yourself somewhere in the middle and have a car. It took less than two hours from our house sitting base near Loulé, in the central Algarve, to drive to Sagres.

As we got close, we noticed a marked change in the landscape; it became sparser and rockier, with sage-coloured greenery clinging desperately to dry, low-growing shrubs. The wind picked up, and the closer we got to the end of the world, the more it seemed as though the ancients may have been on to something: it felt angry and inhospitable.

Past the turnoff for the town of Sagres, the road turns into a thoroughfare to Cape St. Vincent, the last destination before the land falls 75 meters into the Atlantic. As we approached the end of the road, the saw-toothed wall of a fort, flanked on both sides by golden cliffs, rose from the horizon: the fort at the end of the world. 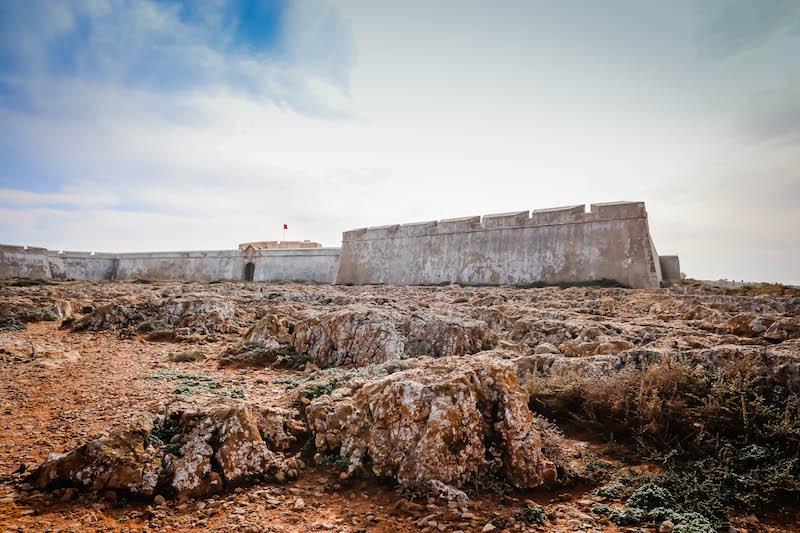 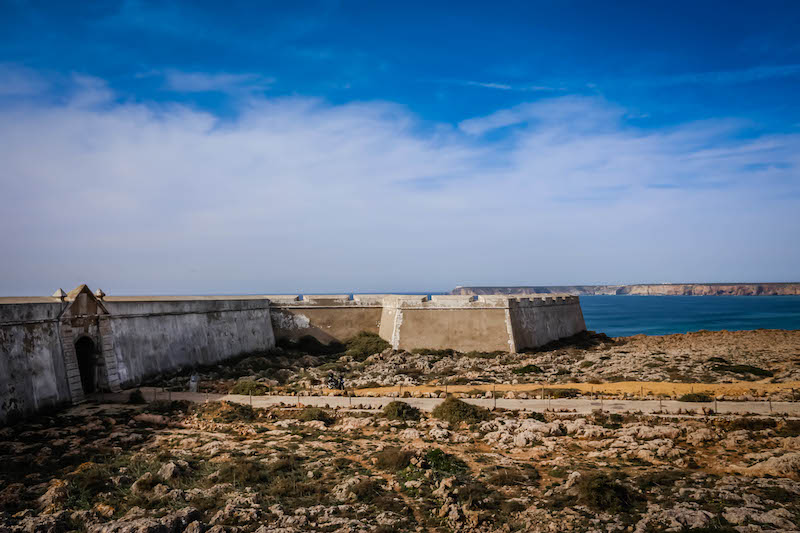 Popular thought (although there is disagreement among actual scholars) holds that Portugal’s Prince Henry the Navigator built the fort in the 15th century as his base, a home from which to launch Portugal’s golden Age of Exploration. Henry created the Vila do Infante, or Prince’s Town, inside the walls of the fort, and gathered some of the best minds of the age to strategize on how to expand the borders of the known world. It was from here that he successfully launched an expedition to round Cape Bojador, on the coast of the Western Sahara; prior to the expedition, it was believed those who sailed past the Cape could not return (plus, there were the sea serpents to content with). Henry’s efforts at Cape St. Vincent set the stage for Portugal’s great triumphs of the sea: Bartolomeu Dias’s expedition around Cape of Good Hope and Vasco da Gama’s discovery of the sea route to India.

To say the fort is wind-swept would be an understatement: the wind defines the visitors’ experience. We bundled up: toques and gloves and coats zipped to cover our chins, the collars grazing the bottoms of our newly-running noses. And while, at first, it seemed as though the fort didn’t have much to offer the visitor, as we wandered around we found ourselves stopping constantly to simply marvel at the natural beauty of the setting. You can see immediately why the ancients would have believed this to be the edge of the world.

We spent almost two hours wandering around the fort, before finally tearing ourselves away from the place; it’s a pleasant feeling to go somewhere with no expectations, and come away with the sense you’ve found a gem. That’s how we felt leaving Sagres, which has since become one of our favourite memories of the Algarve. 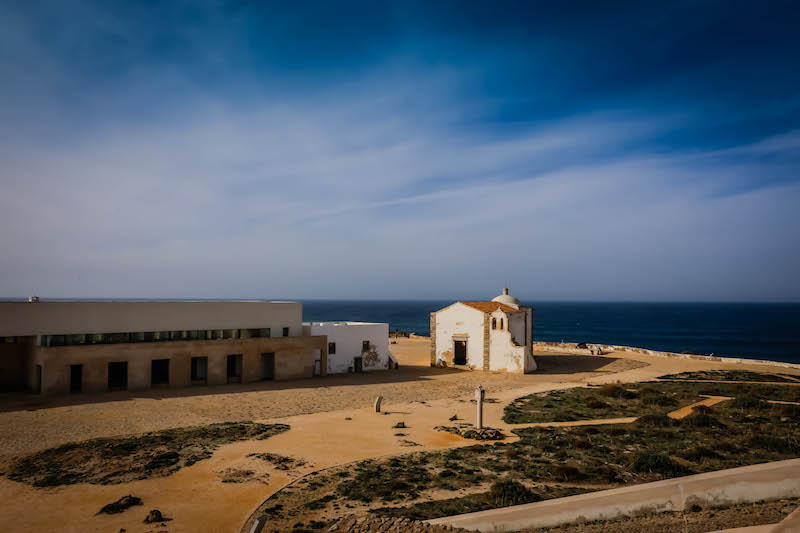 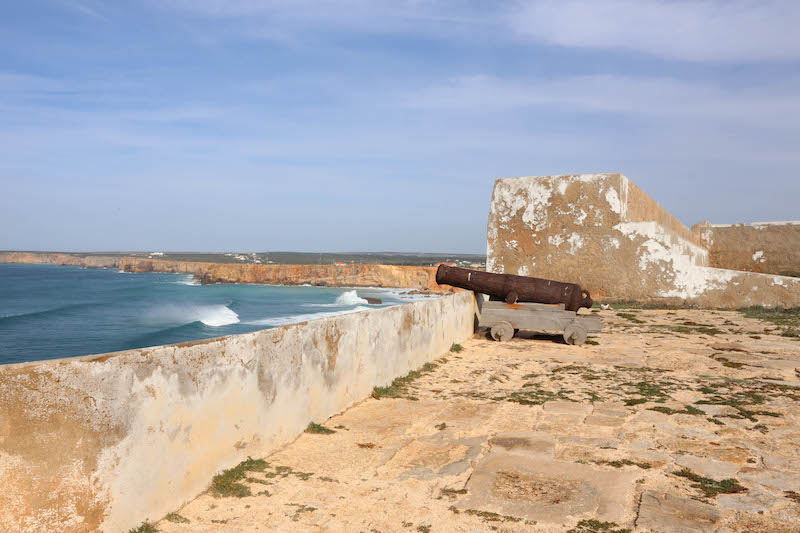 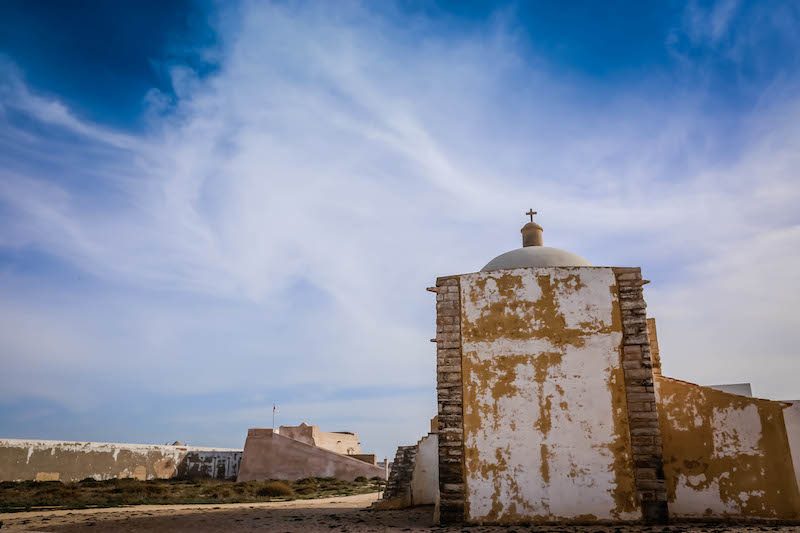 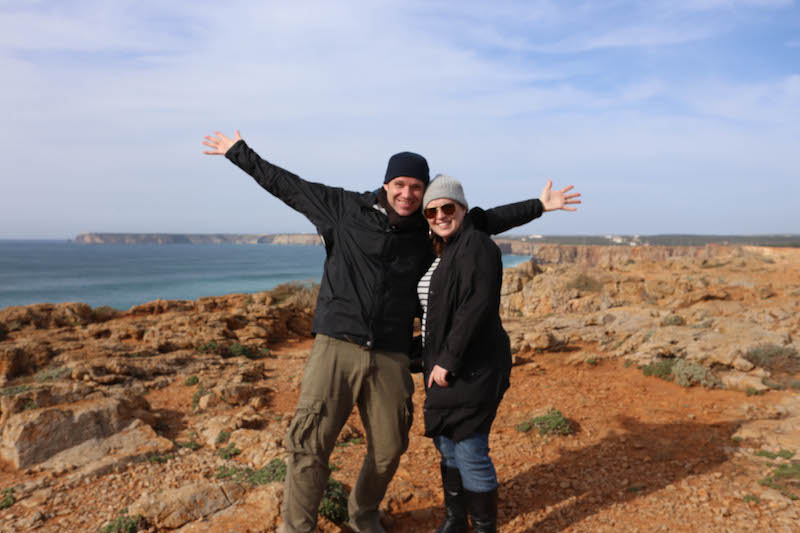 1 thought on “Sagres, Portugal: Fort at the End of the World”