Today I’ll tell you about the time I fell in love with Western China.

You probably don’t know this, but I have been having an emotional affair (betraying my dear, sweet husband) for years now.  It’s part of an unspoken arrangement we have — something that began years before we met — that has followed us into our marriage; an exotic mistress that tempts me with her strange customs and foreign scents.  Before you judge me for my callous insensitivity, let me say:  Geoff is not innocent either.  We both have our emotional attachments.  For Geoff, his true love is, of course, beer. 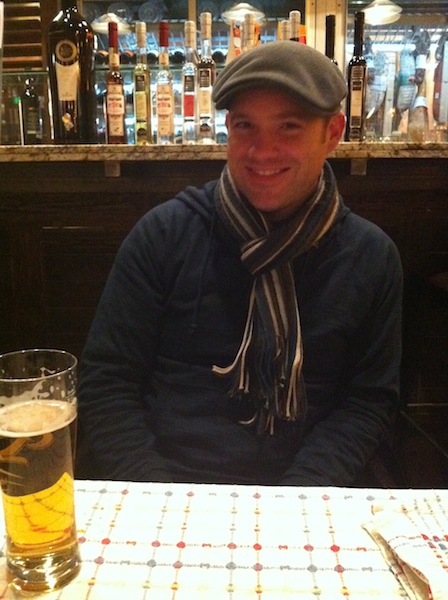 For me, China is the exotic, forbidden lover that I crave.  This first time I set foot in this land, I arrived by sea on (I shit you not) a slow boat from Japan.  I’d just finished up a year of working in Japan, and I had no plans and few thousand dollars burning a hole in my backpack.  So I did what any 23 year old with an insatiable case of wanderlust (or a WanderTooth, if you will) would do, and I dropped out of university (for, like, the millionth time) and took off on an adventure.

I spent three sweet months wandering around China, at first with two colleagues-come-friends, and then by myself.  We finished up work, took a bullet train to Kobe, and loaded up with enough beer and gin to last us three days in the middle of the East China Sea.  We exhausted the booze supply within the first day and spent the next two days playing cards, sober, in the middle of the ocean.  But it didn’t matter, because we were going to have ourselves an adventure! 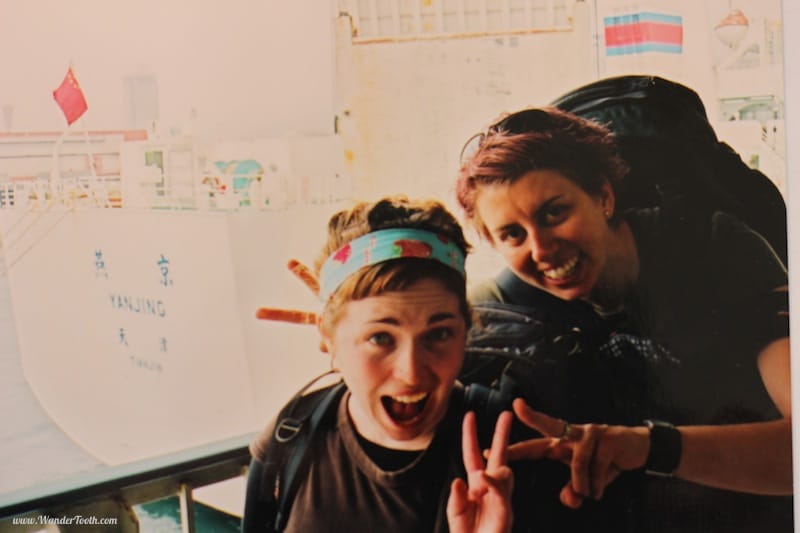 Me and Rachel, getting ready to board our ship. Notice our peace fingers, Japan-style!

We arrived in Tianjin, the port nearest to Beijing, and travelled together for 2 or 3 weeks before my friends returned home to their respective continents to embrace responsibility and adulthood.  During the first two weeks, we hit up all the usual spots on the eastern seaboard – the China that materializes in my mind when someone says the word “China”:  The forbidden city, the Great Wall, and Shanghai. We found found ourselves in the strangest of strange situations — twilight zone-esque towns.

These men were VERY confused by us. Hilarity ensued.

We marveled at the wonders of train travel in China (I had never taken a sleeper train before!). 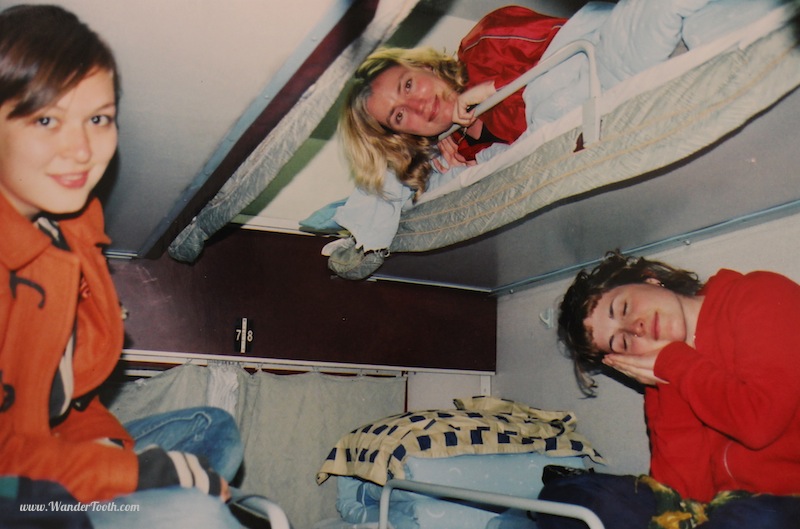 Holy crap we look like BABIES! I can’t believe I was ever that young!

In Shanghai, Rachel and I said goodbye to Julie, and jumped on a train heading west, arriving four days later in Kashgar,one of China’s western-most cities, and situated right on the border with the ‘Stans. Suddenly, I had arrived in the China out of reach of even my wildest dreams; the China of the Uyghur people.  This China was a completely different version of a country I dreamed about:  the landscape was harsh and bright desert. 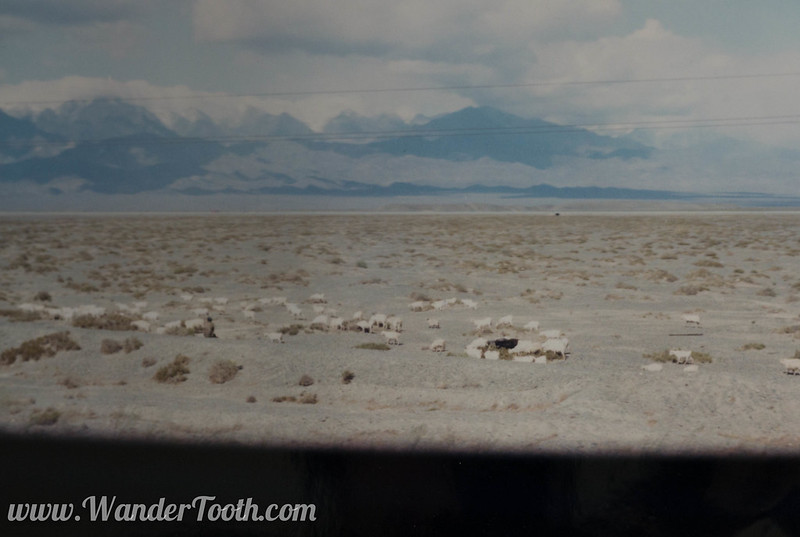 Taken from the window of the train…I never could have imagined that this is what China looks like.

The people didn’t look Chinese.  Women wore headscarves and sparkling dresses and looked, to me, like exotic fortune tellers.  They were less reserved, but with a wariness of their faces that, I imagine, comes from decades of repression. Xinjiang province is Tibet’s less publicized sister; just as brutally repressed as Tibetans, but without a key figure around which well-meaning Westerners can rally. 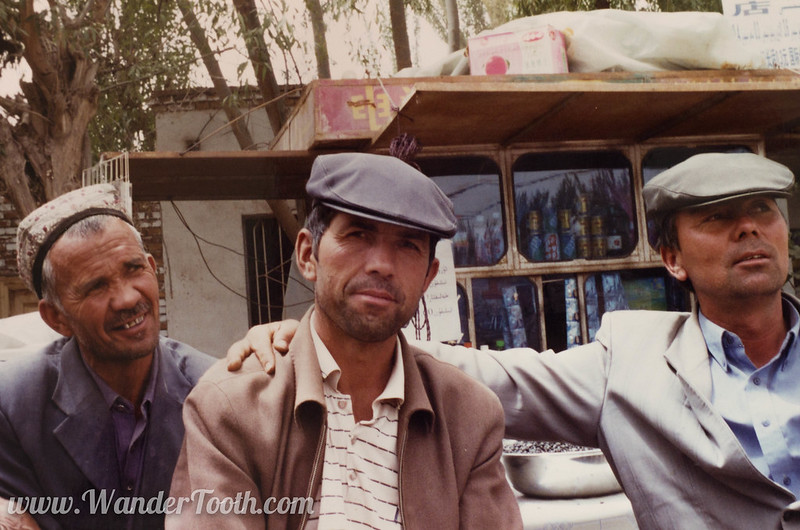 We’re not in Kansas anymore, kids

This was the China of the ancient Silk Road, a place that still plays host to traders and (in my over imaginative mind) vagabonds.  I fell in love with Western China and I imagine — if you ever get the chance to go — you will too.

I loved Western China, so wanted to share my top 3 places to visit..

1) Dunhuang, Gansu Province, a stop on the ancient Silk Road, is strategically positioned between the southern silk route and the road between India and Mongolia, via Lhasa.  Today, Dunhuang is mostly known for its namesake caves, which are filled with fancy Buddhist art. 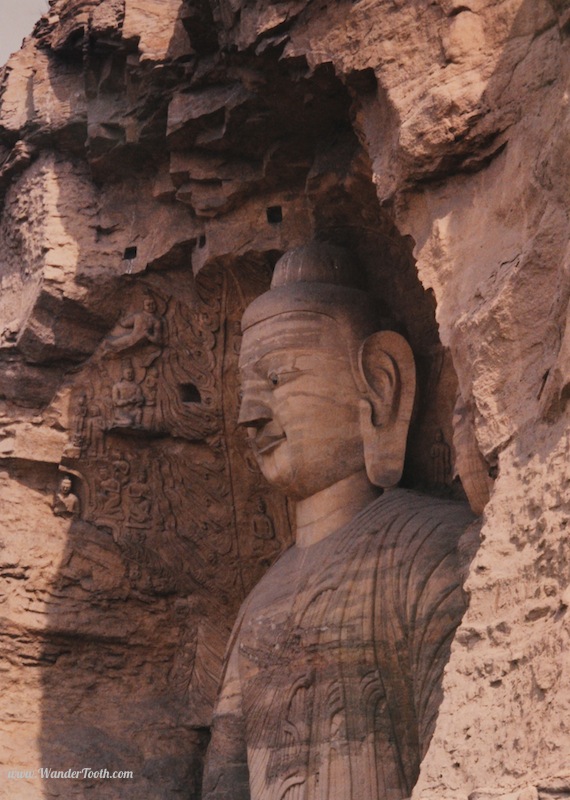 These are the Yungagan Grottoes which, together with the Dunhuang Caves, make up 2/3 of China’s 3 famous Buddhist sculptural sites. What I’m trying to say is, same same but different.

My favorite part of Dunhuang, however, were the gigantic sand dunes that tower over the city.  Rachel and I grabbed a few cold Qingdao beers and climbed to the top of the tallest dune right before sunset, cracked open a couple cans and watched the sun go down on this city of ancient sages and adventures. Bliss!

2) Kashgar – I’m a sucker for markets of any kind.  On my first ‘real’ trip, I almost blew my wad (of money you guys, c’mon!) and did a happy dance at the same time when I set eyes upon the night market in Chiang Mai, Thailand.  But Kashgar’s market is a market to end all markets.  For starters, it’s NFT (not for tourists).  This is a functional market, and what the Guardian calls the best Sunday market in the world. IN THE WORLD!  While I haven’t visited every market in the world, I can vouch for this one because it kicks ASS!  If so inclined, one could buy a sheep and a sequin-crusted scarf within minutes of each other.  It’s where you’ll probably eat most meals, and if you’re in Kashgar with kids, it provides loads of entertainment. And Kashgar itself feels like a wild western outpost of adventure, a city that sees is population swell by 100,000 (almost none of them tourists) for the Sunday market.  Surrounded by the Karakorum and Pamir mountains and the Takmilakan desert, Kashgar served as an important trading outpost on the silk road. And it’s awesome.

Also, there are a lot of sheep asses, which I naturally find to be hilarious.

3) Turpan, in Xinjiang province, is located just 30 meters above sea level and experiences a punishing range of temperature, going as low as -28C and as high as 48C, with only 15mm of rain ANNUALLY!  There is a beautiful mosque in Turpan that looks like a sandcastle, and it is a fertile, fruit growing oasis surrounded by the Takmilakan; it even bears grapes for wine!

That’s it for now.  Tell us if you’ve been to any of these destinations.  Is Western China on your list?

8 thoughts on “Fall in Love with Western China”