Skip to content
Home » North America » USA » Why You Should Visit the Harley Davidson Museum (Even if You Don’t Like Motorcycles)
This post contains affiliate links. Learn more. 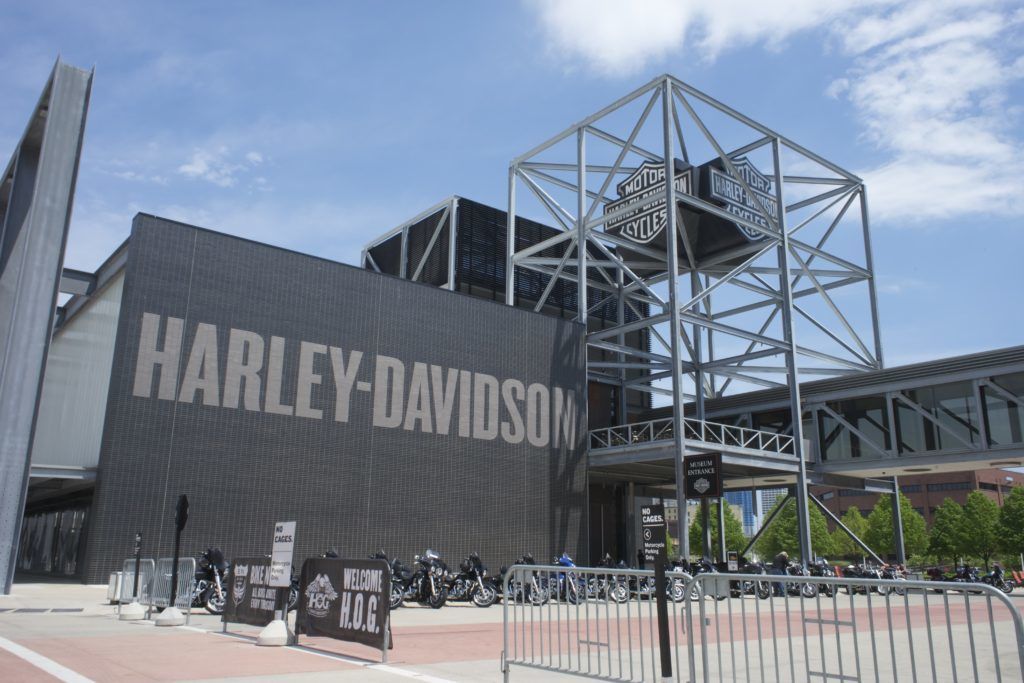 “Look at this,” Geoff gently tugs at my coat, chuckling as I turn my head.

He’s standing in front of an old, graphic poster from the 1920s or 30s, made up of what looks like red, blue and black marker illustrations of rosy-eyed, red-headed children holding up placards.

To our modern eyes, and at a passing glance, the poster seems to be depicting a protest. And then I look closer, and notice the messages being delivered by the cheerful, simply-drawn people:

Help Stamp Out Walking, proclaims the largest and most prominent placard.

We’re looking at an advertisement for Harley-Davidson…an advertisement bearing a message that — these days — is almost impossible to imagine as anything but quaint and quirky, let alone an effective call-to-action and impetus to purchase.

It’s a reminder of how far Harley-Davidson has come, but also how deep their roots grow, twisting and shaping modern American society and culture over more than a century of manufacturing and sales.

And we’re about to learn all about it at the Harley-Davidson Museum in Milwaukee.

What can a museum about motorcycles offer people who have no interest in motorcycles?

Honestly, I didn’t know what to expect from the Harley-Davidson Museum, an industrial-looking building of sharp corners, steel, and — of course — ample Harley parking within walking distance of downtown Milwaukee.

Neither of us has much interest in motorcycles, nor have we ever been a part of motorcycle culture. And yet, we were intrigued enough that we specifically requested it be included on our 4-day itinerary exploring Milwaukee.

What on earth could a museum dedicated entirely to Harley-Davidson motorcycles have to offer people who have no interest in motorcycles?

That was the question, and the challenge, we silently put out to the Harley-Davidson Museum before our visit. And no one was more surprised than us by how spectacularly it delivered.

If you let it, travel stretches your mind, forcing you to question your preconceived notions and open your mind to alternative ideas and ways of living.

What I learned at the Harley-Davidson Museum is you don’t have to travel far for the lessons to sink in.

Burly, leather-clad, tattoo-laden, middle-aged: that was my concept of Harley, before visiting the Museum.

The story is in fact far more nuanced, interesting and relevant than we imagined.

Entrepreneurship & The American Dream in Milwaukee

Harley-Davidson began in a tiny wooden shack in Milwaukee, WI, just after the turn of the twentieth century, when two friends – Bill Harley and Arthur Davidson – decided to build a motorcycle.

While the first effort was rather disappointing, it wasn’t a total failure, either.

For the intrepid and youthful Messrs. Harley and Davidson, not a total failure was reason enough to keep going. They enlisted the help of Arthur’s machinist older brother, Walter Davidson, and continued to work on a prototype, refining the first iteration to give it more power.

From 1901, when Bill Harley first came up with the idea, it took three years before they had a functional prototype they were happy with, and then another year to make their first sales.

Let’s just take a minute to let that sink in: they only made THREE sales in an entire year. And that was enough success to keep going.

From the tiny wooden-shed origins of the company, the founders built a business that quite literally transformed America, revolutionizing transportation by selling motorcycles to private citizens, police forces, the postal service, delivery businesses…

Like the advertising poster foreshadowed, Harley-Davidson began to stamp out walking.

Born during Milwaukee’s golden age — back when Miller and Pabst and Schlitz were the kings of beer, and Milwaukee was their kingdom — Harley survived and grew because of its ability to transform and innovate, build products focused on customers’ needs, and create a community.

Like Milwaukee’s fortunes, Harley’s ebbed and flowed over the years, reaching a crisis point as manufacturing fortunes shifted south and east.

One of my favorite stories from the Harley-Davidson Museum is one that Forbes has called one of the Greatest Business Stories of All Time: the story of the employees who saved the company.

In the early 1980s, Harley was on the brink of extinction. It had been bought out by a corporate conglomerate in 1969, and years of mismanagement and a failure to adapt to overseas competition meant that by the 1980s, things weren’t looking good for Harley.

And then 13 employees took charge, buying Harley back from their AMF corporate overlord in a leveraged buy-out, lobbying the federal government to impose temporary protectionist tariffs to gain an advantage over Japanese imports, and rebuilding Harley from the ground-up with Japanese manufacturing and management techniques woven through the fabric of how everything was done.

Together, they took a spectacular risk, and enacted a spectacular turn-around, turning over $80m in borrowed money into $10b in value.

Why You Should Visit the Harley-Davidson Museum

During our four days in Milwaukee, almost everyone we talked to wove a portrait of a city that’s on the up-and-up, as small businesses — distilleries, food tours, restaurants, breweries, and more — work to shape the future of a city that has far more energy than we expected, and replace the emptiness left by the decline of manufacturing companies that didn’t make it.

The Harley-Davidson Museum is part of that. It tells a compelling story of a business that started out in Milwaukee’s last golden age, survived tough times through smart strategy and sheer will, and is now a point of hometown pride in a city that’s changing overnight.

The Harley-Davidson Museum tells more than the story of a motorcycle brand, it tells the story of Milwaukee and –it’s really hard to write this in a way that doesn’t sound completely cheesy — of the American Dream.

Who Should Visit the Harley-Davidson Museum

In case I haven’t rammed this point home yet, you don’t have to be a Harley enthusiast, or even a motorcycle enthusiast, to enjoy the  Harley-Davidson Museum.

If you like graphic design, you’ll like it…the museum is filled with old advertising posters and flyers for bikes and events, like the Stamp Out Walking example. Harley is known for a signature style that you can see develop in front of you, as you walk past generations of iconic motorcycles.

If you like modern American history, you’ll like it…seeing the role Harley played in the development of transportation, transforming police and business transportation, and their role in the war was fascinating, much of it backed up with old newspapers and other artifacts that were really cool to see.

If you like pop culture, you’ll like it…seeing the Harley owned by Elvis, those included in movies, and those that became legendary in their own rights, like the rhinestone-encrusted bike customized over a lifetime by its owners.

If you like business and entrepreneurship, you’ll like it. It is, after all, one of the greatest business stories of all time.

And, of course, if you like Harley-Davidson motorcycles, or motorcycles in general, you’ll love it.

I walked away from the Harley-Davidson Museum feeling as though the story of Harley-Davidosn is really the story of modern America: building something from nothing, surviving tough times, innovating and transforming, and – ultimately – succeeding, probably beyond the wildest dreams of the founders.

The Museum made me feel nostalgic for something I’ve never been a part of, and never will be a part of: an idea of America that showcases the best parts of the country during a time that — at least it seems to me, as an outsider — many Americans are questioning whether still exists.

And it did what many museums fail to do: feel something, deep down; question preconceived notions; learn something new and interesting.

So here’s why everyone should go to the Harley-Davidson Museum in Milwaukee:

Travel is a gift that lets us learn new things about people who are different from ourselves. It makes us question our assumptions and forces us to step outside our bubbles and think about things in new ways.

And this museum did that for me, which is why I say you should go and see it for yourself, even if you don’t care about motorcycles.

The Harley-Davidson Museum is within walking distance of downtown Milwaukee, and about 10 minutes’ walk from the Potawatomi Hotel, where we were hosted during our stay in Milwaukee.

We took about 2 hours at the Museum, which is probably enough, unless you love reading every single exhibit. There’s also a café and restaurant on-site in case you get hangry while exploring.

Tickets are $20 per adult, with discounted/free tickets available to seniors, students, military, children, and HOG members.