Today we woke up to a damp world; it had rained over night, and there was mist shrouding the green rolling hills surrounding the house we’re sitting. We decided to wait a bit longer than usual to take Bella the dog for a walk, and just as we finished eating our breakfast, the sky opened up and it began to rain.

Before we got to Portugal, we’d been warned it rains more in the winter than any other time of year. I silently wondered if I had agreed to move from one soaking wet place to another. I looked up an average monthly rainfall chart for Faro, which is about 20km from where we’re staying, and found that December in Faro receives less rain than an average week during a Vancouver winter. So…yeah…I figured we could probably handle it.

Sure enough, the rain stopped after 15 minutes, and we were able to head out on our walk.

The sun started teasing us, and we decided it would be a good day for a road trip. This isn’t the first road trip we’ve taken here — we went to Loulé last week, and then to Olhão and Estoi earlier this week. I haven’t posted on those yet, but have realized that life here is going by faster than I can write about it, so I’m just going to post as things happen. I’ll catch up on previous destinations soon (I wrote about Lisbon here).

We decided to drive to the Spanish border, and then work our way back until we got tired, or felt we’d seen enough. We took the long way there, wanting to avoid the faster, more direct toll road to keep costs down. It was a pretty drive that took us about an hour, winding through little villages, whitewashed towns, and past orange and olive groves.

Vila Real Santo Antonia is in the southeastern corner of Portugal, just across the Guadiana river from Ayamonte, in Spain. The city honestly didn’t do much for us. It is pretty enough, but we couldn’t figure out what there was to see, and just sort of wandered aimlessly, waiting for interesting sights to run into us. There was a tiny Christmas market, which was kind of cute, but I couldn’t get into if for lack of my favourite Christmas market ingredient: hot, spiced wine.

We had some lunch (€3.50 for a hamburger, chips, and a drink) and decided to cut our losses and get outta dodge, but as we were driving out of town we saw a building covered in beautiful azulejos. We parked and took some pictures before I realized it was a Ministry of Defence building. Just as we were about to leave, I took one last photo of the building as an employee came to open up the doors, re-opening from siesta. Seeing him gave me pause, as I remembered the “don’t take pictures of military stuff” rule, but he didn’t seem to care, so we went on our way.

Castro Marim was, in our opinion, far worthier of our time than Vila Real Santo Antonio. We had a guidebook in the car from the house in which we’re staying which basically described the town as (I’m paraphrasing) better looking from afar, but we found it quite lovely. The town itself is nestled between two hills, one on the north side and one on the south. Sitting atop the hill on the north side is a castle, and atop the hill on south side is a defensive fort.

I think I also liked Castro Marim more because of its history. Being strategically located on the present-day border with Spain and close to North Africa means its seen lots of action over the years. It dates back to around 5,000BC, and was, for a long time, a port town for the ships travelling from nearby copper mines along the Guadiana river. In the 1300s, the town’s fortunes began to change; to reverse the waning population, the king made it a sanctuary for fugitives. Kind of like Portugal’s own little Australia. Oh, snap!

The Castle, St. Sebastian Fort, and main church are probably the most interesting things to see. The castle dates back to the 1200s (and has a steep €1 entry fee…PER PERSON!). The fort, directly across from the castle, was built in the 1600s as a defensive structure. It was closed for some reason, but we could still walk around the outside walls, which offered a nice view of the castle and plenty of dog crap to step around. The church is in the valley between the two, and dates to the 1700s and 1800s. From the front, it is pretty, but not particularly special. However, it has a nice dome which you can see from the side, or from the castle or fort.

On the way home, we decided to splurge, and took the A-22 toll highway back from Castro Marim. The drive from Castro Marim to our exit, near São Bras de Alportel (everyone just calls it Sao Brash), cost us about €4.20 in tolls, and it probably saved 25 minutes. Worth it at the end of the day.

It was a beautiful drive, as we happened to hit the highway right at golden hour as the sun was beginning to set. We were driving from east to west, from the Spanish border to about the middle of the Algarve region. At one  point, I looked north and the sky was bright blue with fluffy cumulus clouds; I turned my head south, and the sky was gold with flecks of silvery blue. I tried to take a few photos, but of course always had the lens cap on when the perfect scene came along, and was too slow to capture it. 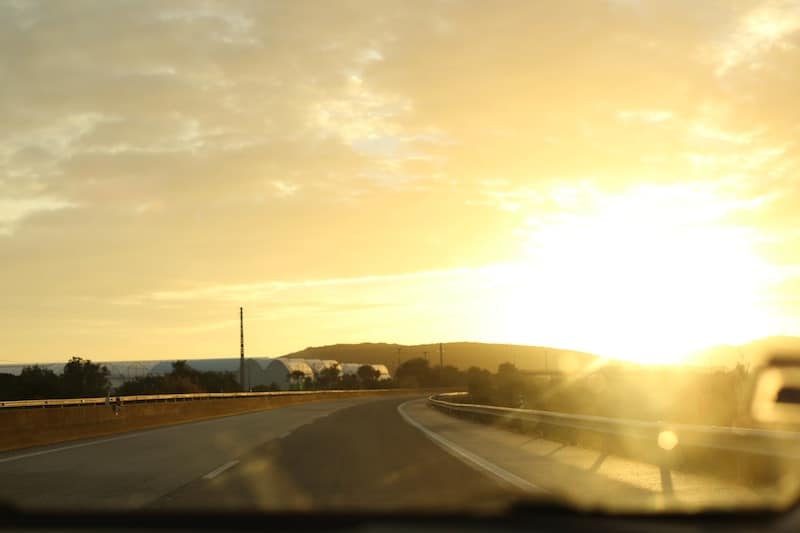 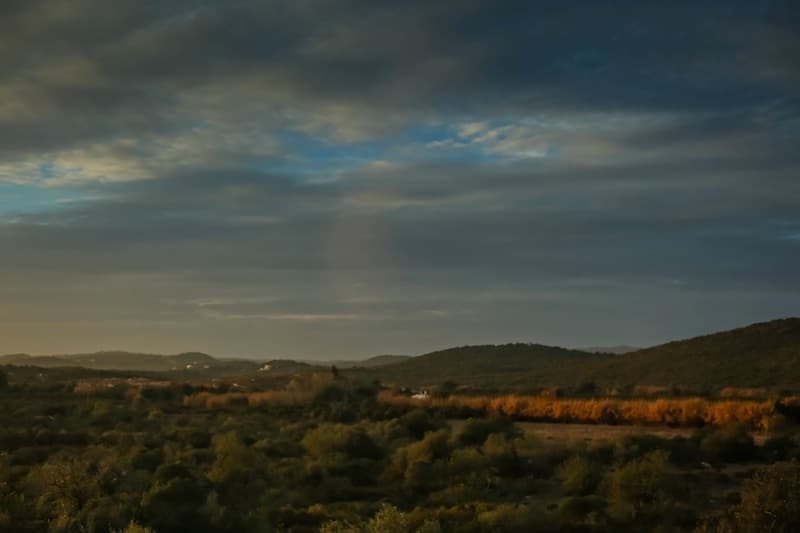 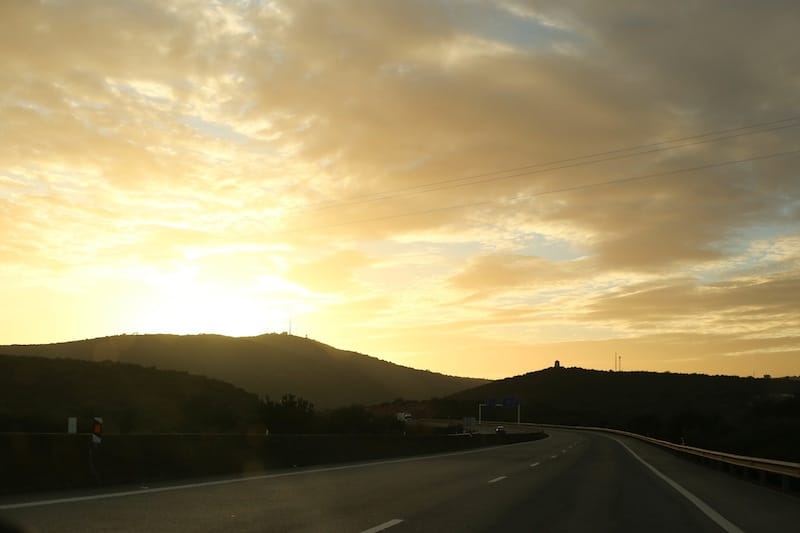 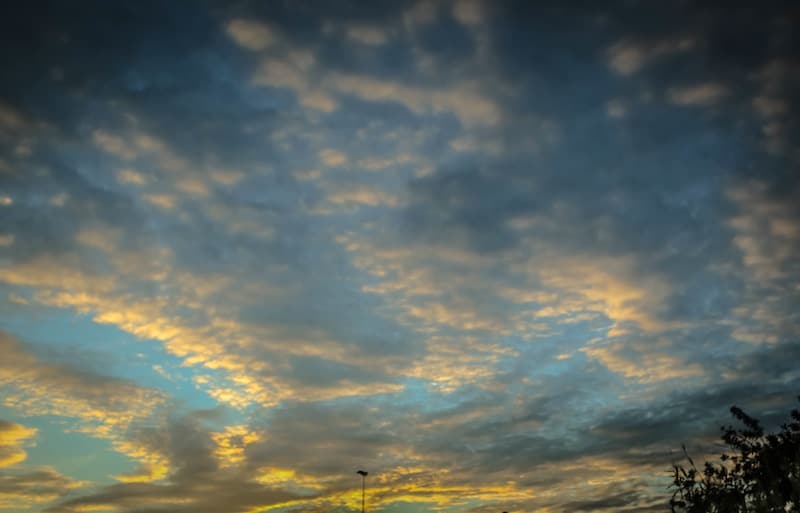 We arrived home to a vibrant pink sky, just in time to witness the sun say goodbye. Not a bad Friday in Portugal. 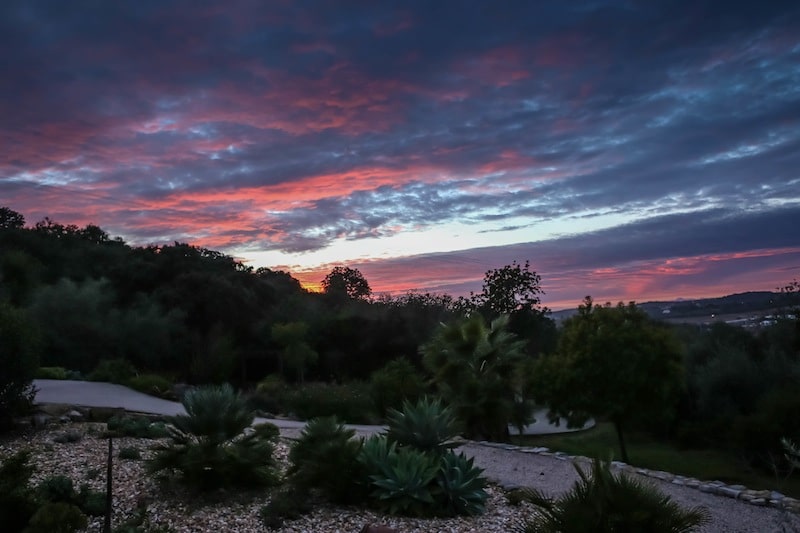