A man in a crisp white golf shirt is standing in the intersection, loudly thwacking the outside of our colectivo taxi with a rolled-up newspaper, presumably trying to make a sale. Our driver ignores him, focusing instead on hacking up — if the sound is anything to go by — gobs of thick, uncooperative phlegm. The man sitting to the left of me is texting, underwater bubble sounds confirming the send and receipt of every text message, and the fake clickity-clack of his keyboard filling the car. Around us, cars honk and music plays. Loudly. Always loudly in Mexico.

After a delayed start, we’re on our way from Villahermosa to Tapijulapa, a pueblo magico in Mexico’s Tobasco state, to shoot a photo that will hopefully become a page in Coloring Mexico, our adult coloring book about Mexico.

My first impression of Tobasco, arriving several days earlier from Ciudad del Carmen, was the colour. And before we’ve even left the state capital of Villahermosa, my impression is reinforced: thousands of shades of green, with the occasional fleck of orange, red, and pink. But mostly just green.

As we leave the city, we learn our driver isn’t particularly concerned by lanes, weaving back and forth to find the path of least resistance, and slowing down only occasionally for topes, the speed bumps all over Mexico to control drivers exactly like this guy. At most topes, entrepreneurs take advantage of the slowed traffic, setting up colourful stalls filled with massive watermelons, pineapples, and jars of fresh honey.

In Tacotalpa, a town about three-quarters of the way between Villahermosa and Tapijulapa, we grab a bottle of water and switch to a new colectivo taxi. This time, our driver has less of a death wish, and I make a mental note why: from the rearview mirror hangs a toddler’s brown and pink vinyl sandal, embroidered with a cartoon giraffe. Older drivers, with outward signs of parenthood, tend to be more cautious.

After only 10 minutes of driving from Tacotalpa, the landscape shifts, and the vegetation starts to take over. We’re on the outskirts of the jungle now, in the foothills of the mountains that roll all the way into Chiapas, and hills begin to jut steeply and unexpectedly from the plains, like grass-covered humps on a sleeping camel.

And then, we just as suddenly find ourselves arriving in a tiny town of narrow streets, whitewashed houses, and red-tile roofs, set perfectly in the midst of the hills and the trees, beside an emerald green river. 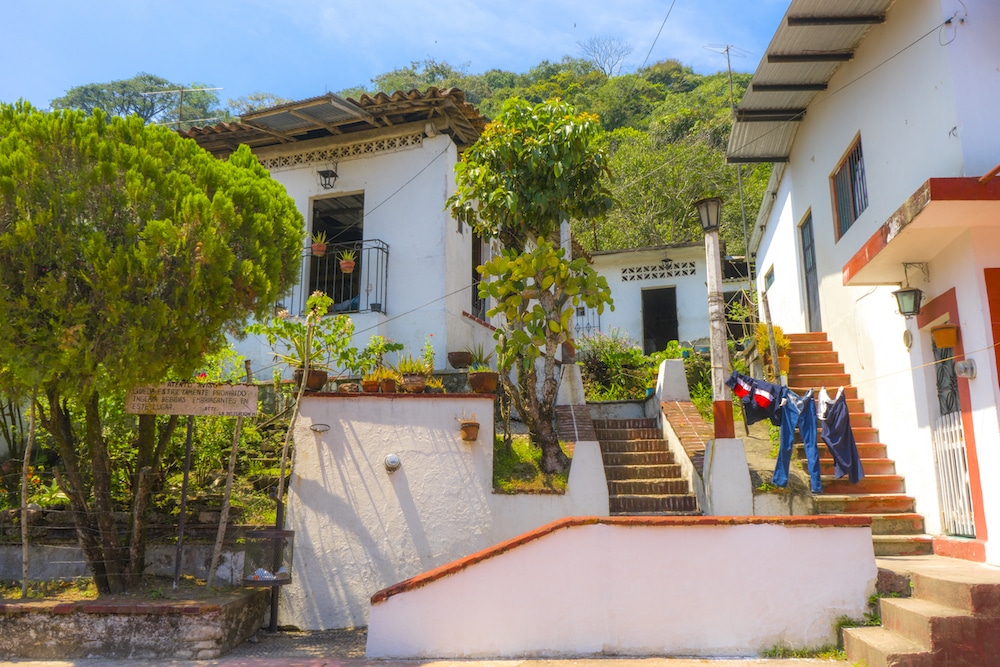 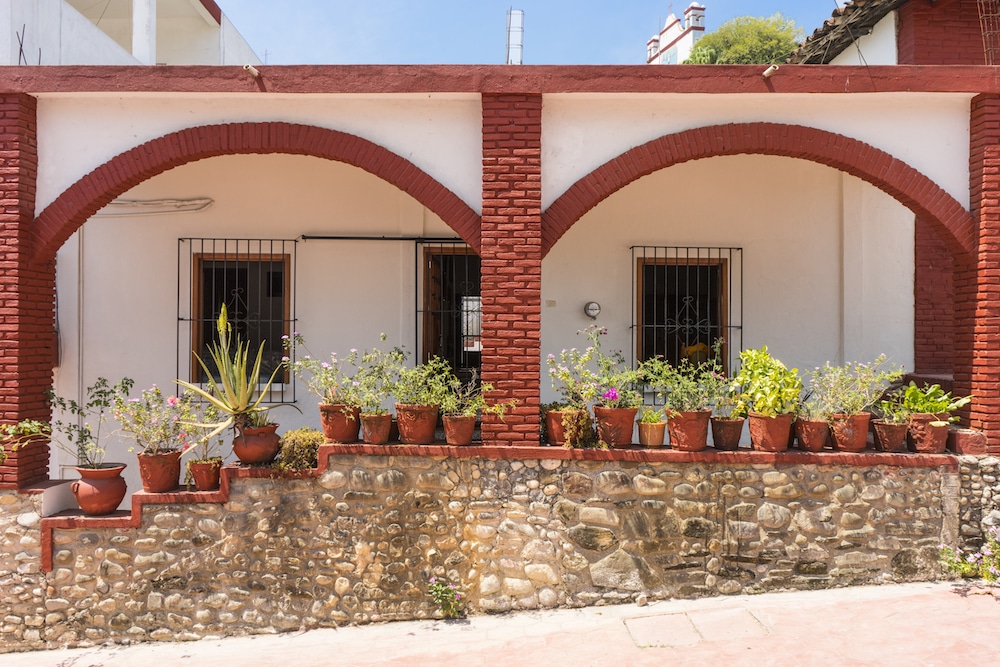 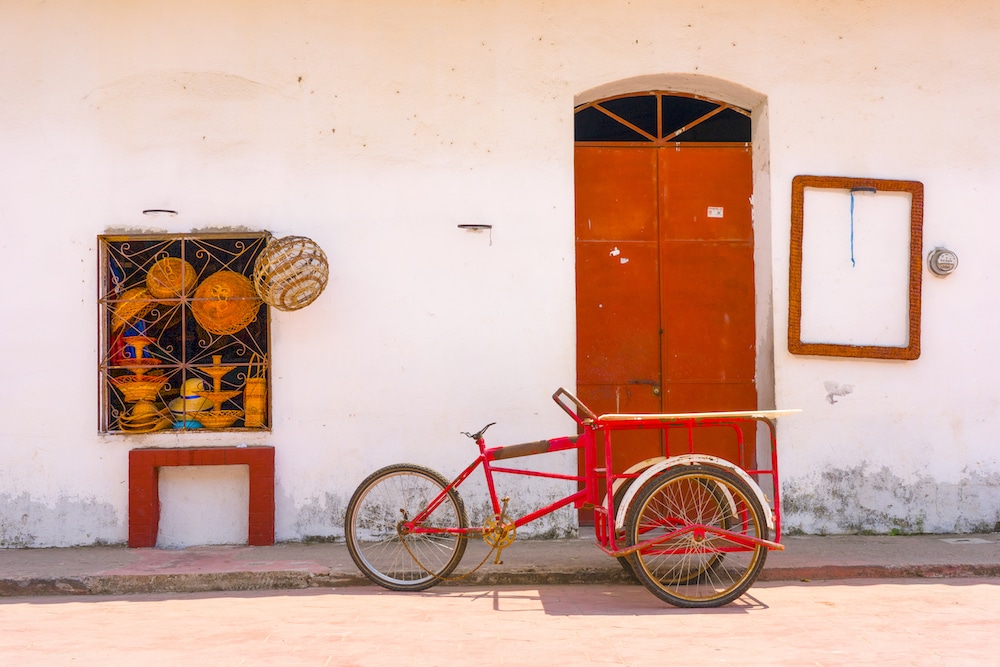 If Izamal is Mexico’s yellow town, Tapijulapa is Mexico’s red, white and green village: the colours of Mexico itself.

The buildings are crisp white, with black wrought iron window grills. The roofs match each other, each one covered in deep red tiles. And the surrounding hills, trees, and even the river provide a view of never-ending green. 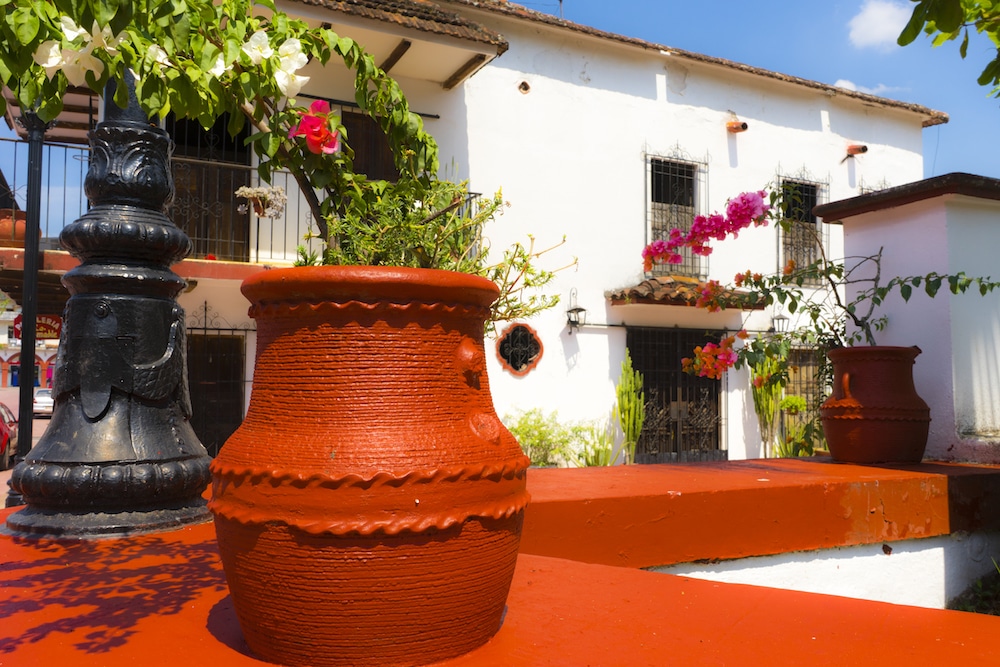 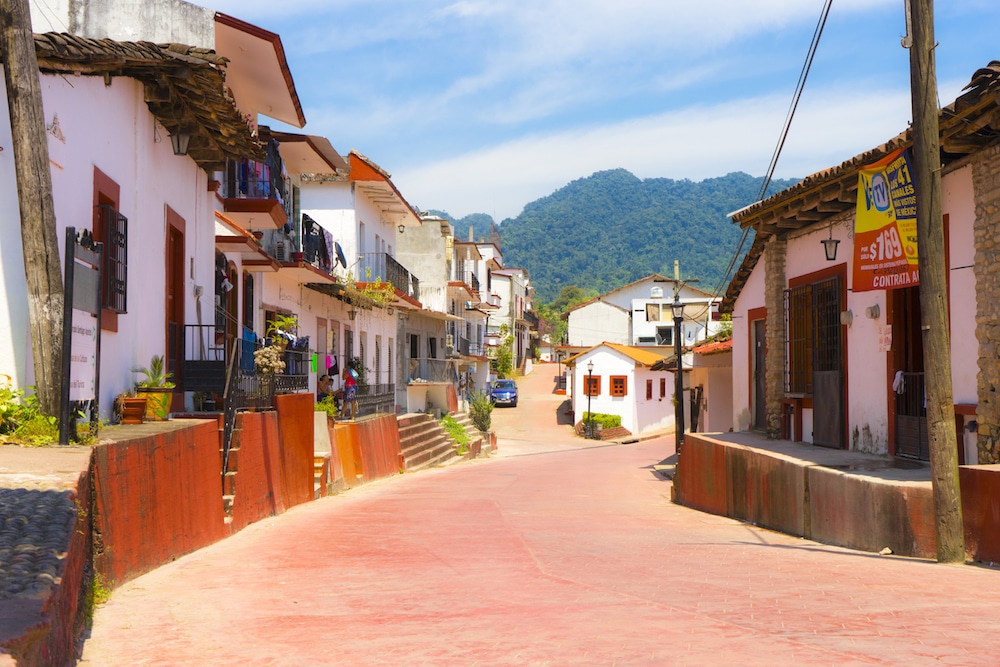 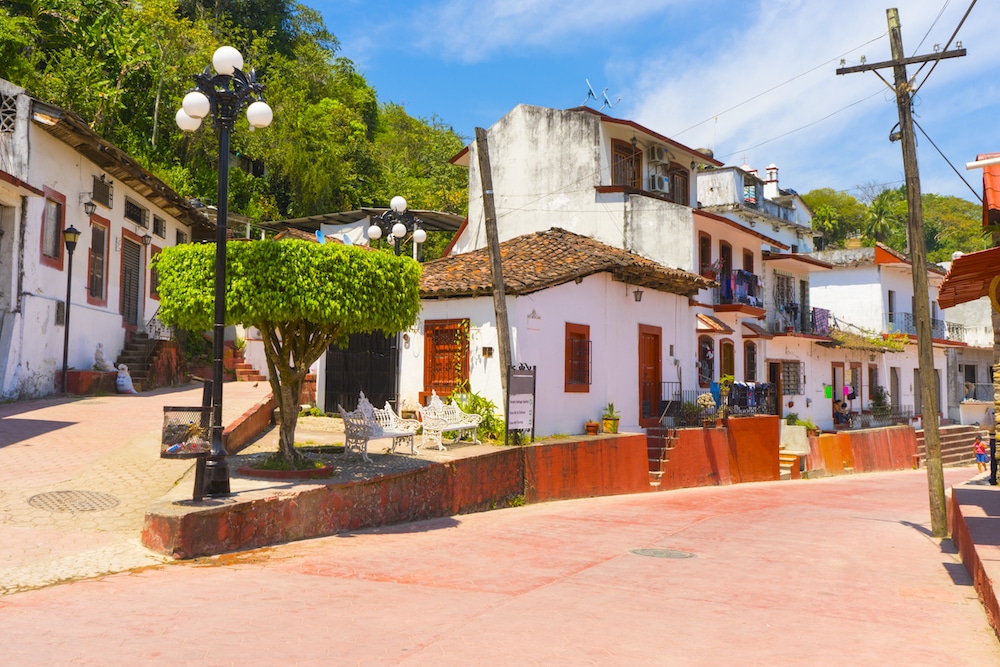 It’s also hot as hell: at one point I checked my FitBit and saw my heart rate was about 40 beats-per-minute above normal, just from the effort of squatting down to take a photo in “feels like” 38-degrees.

Despite its quaintness, naming Tapijulapa a magic town seems a stretch. To start with, it really is too hot to enjoy: we lasted only about 2 hours, 30 minutes of which was sitting in the shade, trying not to pass out from the heat by guzzling a cold drink. And we LOVE heat.

Add to that, it’s difficult to get there, with most of the information online oriented to Mexican tourists with their own car. We spent probably 90 minutes in Villahermosa trying to chase down the correct bus station before finally realizing we needed a colectivo. And this all came on the heels of not making it to Palizada, another magical town, on my birthday.

After loving Valladolid and Izamal, two pueblos magicos in southern Mexico that are easy to get to, we were excited to see more. However, we also quickly realized that just because it’s on the list, doesn’t mean it’s easy to get to, or that it’s even worth the considerable effort. Despite having a truly great experience in Ciudad del Carmen, I’d never actually suggest a tourist go out of their way to visit. Similarly, other than the Olmec Colossal Heads (which, to be fair, are pretty cool), there really isn’t much reason to go to Villahermosa, in our opinion.

Getting from Villahermosa to Tapijulapa

If you decide to go, start the day as early as possible to manage the heat.

From the ADO Terminal on Av. Francisco Javier Mina in Villahermosa, walk north along Av. Francisco Javier Mina, passing the Chedraui on the corner of Lamberto Castellanos Rivera, and walking one more block to the street Abelardo Reyes. Turn left, and about half-way down Abelardo Reyes, on the right-hand side, you’ll see a parking lot with covered waiting areas, signs with different destinations, and lots of taxis with destinations written on the front windshield. Find the waiting area for Tacotalpa.

As you approach Tacotalpa, tell the driver you want to change colectivos and go to Tapijulapa (tap-ee-hoo-la-pa). The driver should then take you to centro, where the colectivos go from.

When returning, the colectivos in Tapijulapa leave from near the church or (less frequently) the town square. The whole journey takes about 2 hours each way, and costs around 75 per colectivo, per person (if I recall correctly). 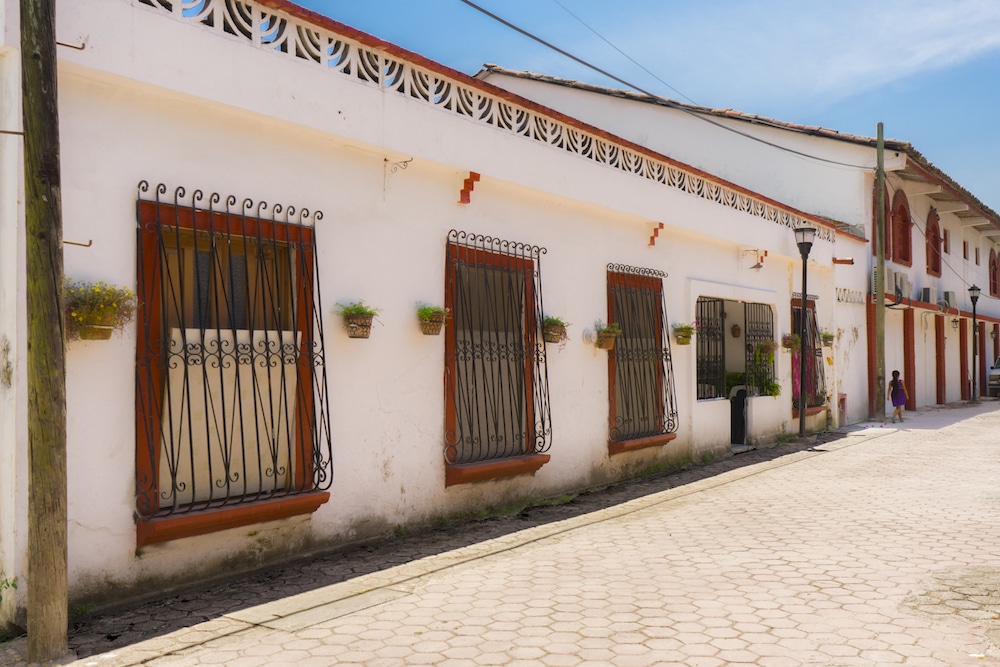 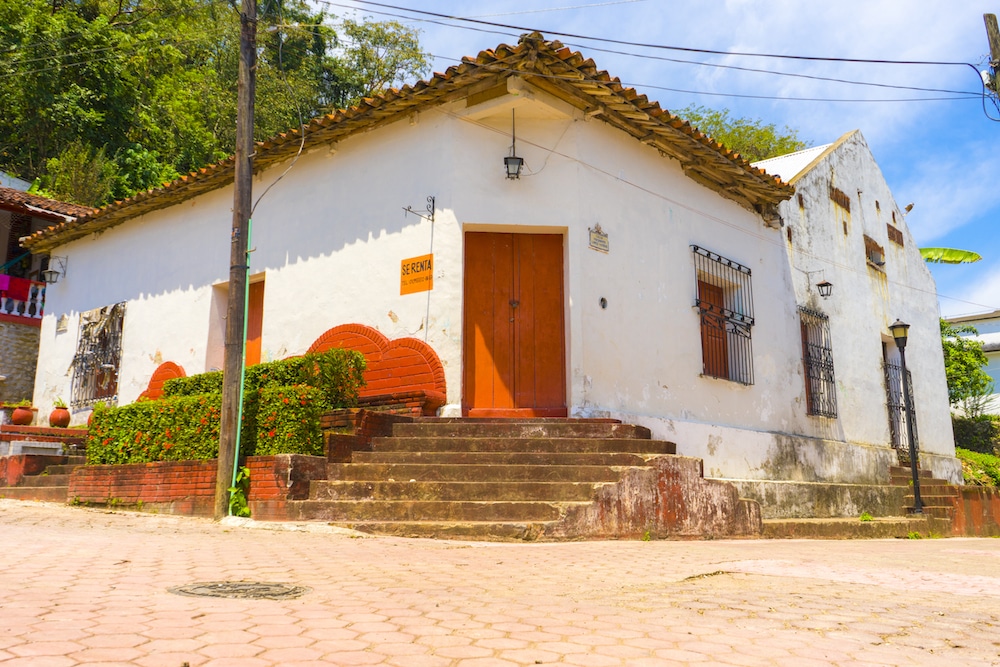 2 thoughts on “Visiting the Pueblo Magico of Tapijulapa, Tobasco State”