Disclosure: This Epic Ireland Irish Emigration Museum review contains affiliate links. That means we earn a commission when you use the links on this site to book a tour, book a hotel, buy your travel insurance, etc.. You don’t pay anything extra, and it helps us cover our costs. If you’d like to learn more about how this works, you can read more under our Disclaimer page. Also note, we were guests of Fáilte Ireland during our time in Dublin, and this experience was complimentary. 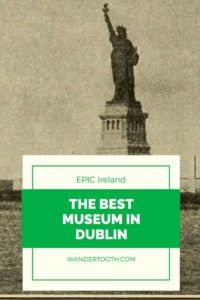 “In any emigrant’s journey, there is a turning point when they have left their home but not yet arrived. At this moment, hope and fear are neutral – a new life is beginning utterly different from the old.”

We found the above quote on a small sign entering EPIC Ireland, a relatively new Dublin museum that depicts the plight and accomplishments of Irish emigrants all over the world. Drawing us in right from the start, the quote reminded of our own experiences leaving our home country to change our lives, caught reflecting about our old lives at unexpected moments as we pushed forward into the unknown. Our circumstances were quite different, obviously, but this quote still struck a chord with us, and seemed to perfectly sum up that feeling of being in limbo that emigrants must feel as they leave their home. Touching ground in a strange new land with nothing but question marks about the new, utterly different life that is about to unfold…it’s both terrifying and exhilarating at the same time. And in the case of Irish emigration, it’s played a massive role in shaping the world into what we know it to be today.

What became of the fearful, the brave on an adventure, and those who left Ireland without much choice or hope, when they reached their new lives? The EPIC Ireland Emigration Museum answers those questions. And provides fascinating insight into the lives of individual Irish emigrants, and the outsized impact they’ve had on our world.

Over the course of 700 years, 10 million people have emigrated from Ireland. Today, a staggering 70 million people around the world have Irish ancestry. As numbers alone, these statistics may not seem that impressive, but when you consider the fact that Ireland’s population is a mere 4.5 million, the massive impact of those who left their home country behind comes sharply into focus.

Whatever the reason for leaving the Emerald Isle – be it famine, religion, work, and adventure – emigration is an integral part of Irish history. 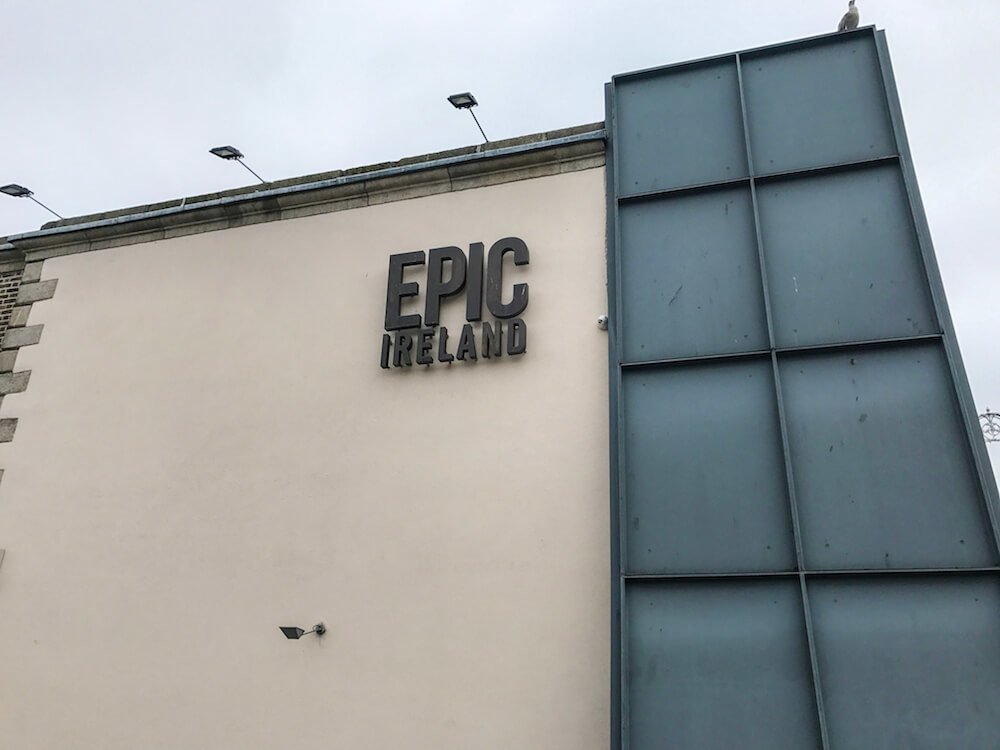 Of course, any museum dedicated to the story of Irish Emigration has to cover the Potato Famine, otherwise known as The Great Famine. Starting in 1845, the Potato Famine lasted five years, throughout which Ireland’s potato crops — a crop which was heavily relied upon at the time — was decimated.

Mass emigration ensued, and of those who could leave, John Ford was among them. Emigrating first to Canada before settling in the United States and fathering six children. John’s first-born, Henry, went on to found the the Ford Motor Company. Would the world be the same if John hadn’t left for North America?

The Great Famine was not the only reason Irish people left their homeland, and Epic is one of the few museums in Dublin that goes into what became of the families that left. 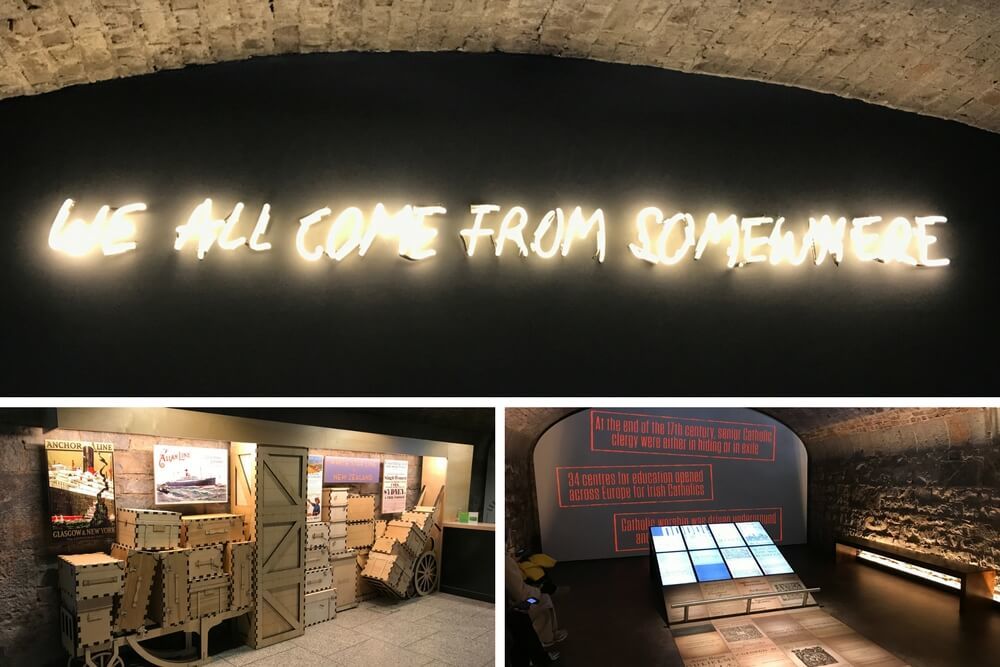 From Henry Ford To 22 American Presidents

Barack Obama once said that “there’s always been a little green behind the red, white and blue,” and, as it turns out, even he can claim Irish ancestry through his mother’s side. Obama’s great-great-great grandfather hailed from Moneygall, and Obama visited in 2011, claiming he came in search of his missing apostrophe!

And it’s not just Obama (or, O’Bama, as the case may be?). We learned at EPIC Ireland that 22 US presidents claim Irish ancestry. JFK famously said during a speech in Dublin “that our two nations, divided by distance, have been united by history.” He was speaking about the United States and Ireland, of course, as he was the first sitting US president to visit Ireland (and also had Irish heritage). We were told during our visit that throughout the 1950s and early 1960s, there were two pictures hanging in every Irish home: the Pope and JFK, and both were treated as equally important. JFK was an icon because he symbolized the great things Irish sons and daughters could accomplish.

Of course, North America wasn’t the only destination for Irish emigrants. Argentina claims 500,000 people with Irish ancestry, and we were surprised to learn Che Guevara has Irish roots as the descendant of Patrick Lynch, a landowner who emigrated from Galway to Argentina.

These are just a few examples of the many fascinating contributions and discoveries Irish emigration has had on the world…there are so, so many more stories waiting at EPIC Ireland. 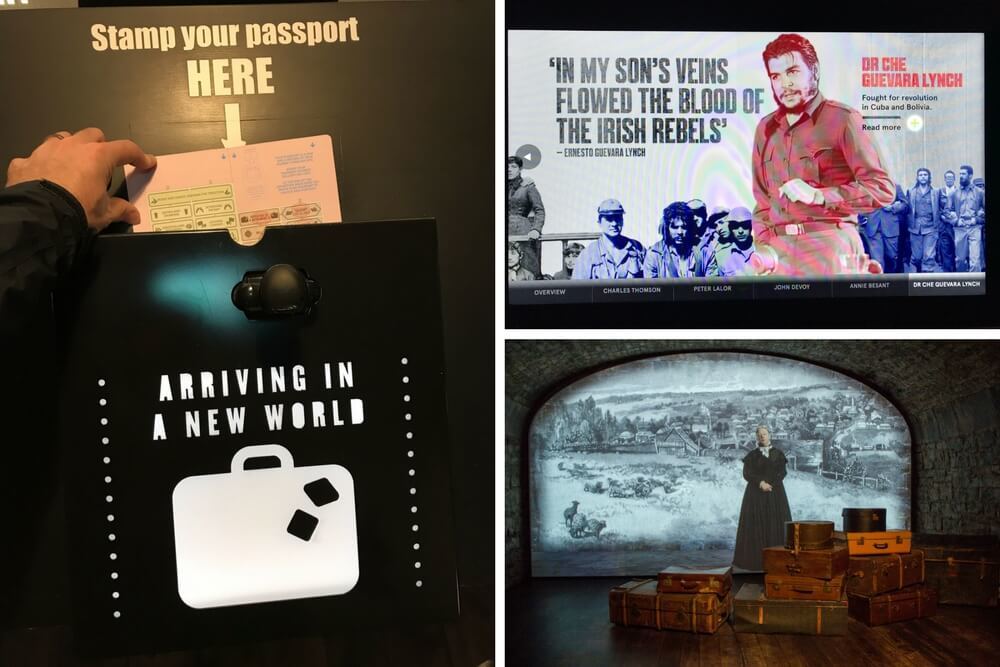 A Museum For The World We Live In

Henry Ferguson revolutionized farming; John Philip Holland developed the first submarine used by the US Navy…many of the names within EPIC Ireland’s walls made their mark on history through medical, scientific or artistic advancements. While they aren’t necessarily household names, EPIC Ireland left us wondering: where would we be today if they, or their ancestors, hadn’t left in search of a better life or more opportunity?

Many of us are descendants from emigrants at some point in our lineage, but many of us have also been resistant to immigrants to our own countries. The EPIC Ireland Emigration Museum shows how powerful it is when those people lay down roots, and have children and grandchildren with opportunities to shine. It certainly served as a reminder to us about the value of immigration, and put some of the current debates into perspective.

We’re just going to come out and say it…we think EPIC is one of the best museums in Dublin, and found it to be one of the best museums we’ve been to for awhile. We found the whole concept so unexpectedly interesting that it almost shocked us. And while we visited many excellent museums in Dublin, EPIC depicts a side of emigration that we’d never given much thought to; it opened our eyes, and served as a welcome reminder about the value of emigration/immigration during an era in which the concept is often treated as politically toxic.

Beyond the ideas of the museum, it’s also exceptionally well presented and designed. Located in the ultra-modern CHQ Building on the banks of the River Liffey, it mixes different types of displays to keep you engaged. You begin your journey by getting your own passport as you weave your way through stacks of vintage suitcases to a departure point. Interactive displays and info points help you navigate through different time periods, different reasons for emigrating, and different themes, such as scientific study, art and literature, and sports and politics. As you pass through each, you can have your passport stamped.

Get your Epic Irish Emigration Museum tickets here. Open 7 days a week from 10am until 6:45pm, last entry is 5pm. Located in Dublin’s modern docklands area, there is a cafeteria on site in the CHQ building, and a great restaurant in the building (ely Wine Bar) if you want something nicer. The facility is very modern and wheelchair accessible. Guided tours are available on a first come basis and audio guides are available, but you can just go and enjoy the museum at your own pace as well.

Get your Epic Irish Emigration Museum tickets here. Open 7 days a week from 10am until 6:45pm, last entry is 5pm. Located in Dublin’s modern docklands area, there is a cafeteria on site in the CHQ building, and a great restaurant in the building (ely Wine Bar) if you want something nicer. The facility is very modern and wheelchair accessible. Guided tours are available on a first come basis and audio guides are available, but you can just go and enjoy the museum at your own pace as well.

Further Reading to Help You Plan Your Dublin Trip