Disclosure: This post contains affiliate links. That means we earn a commission when you use the links on this site to book a hotel, buy your travel insurance, etc.. If you’d like to learn more about how this works, you can read more under our Disclaimer page.

This is a guest post by Corina Preda from anothermilestone.eu

When you think of Romania, you might think about the country’s better known attractions. Bran Castle, Transylvania’s fortified churches, the Transfagarasan, and (of course) Bucharest. If you only have a few days to explore, by all means focus your efforts on the most popular places to visit in Romania. But if you have longer to explore, don’t hesitate to add some of these new, lesser known places to visit in Romania to your itinerary. You might find some nice surprises!

Renovated just a few years ago, the Culture Palace in Iasi is the symbol of the city. It was built at the beginning of last century, and for many years was considered the tallest building in town due to its central tower (55 meters). The palace’s interior can be visited every day from Tuesday to Sunday. It hosts several museums, including the Moldavian History Museum, the Art Museum, the Moldavian Ethnographic Museum, and a science and tech museum. The entrance ticket to the palace covers all of them. 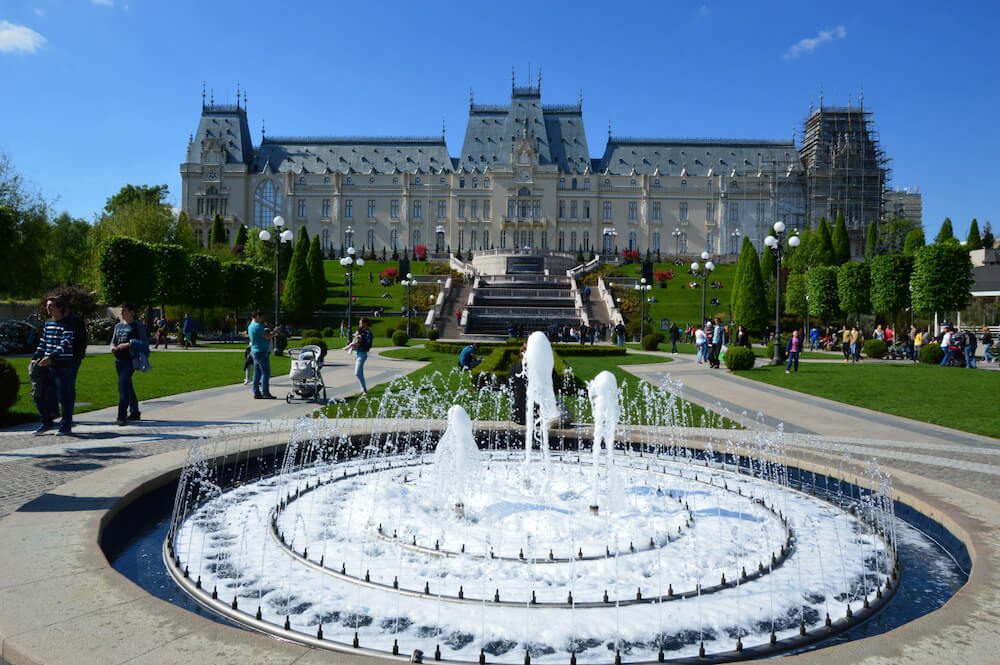 Mostly known for hosting the Electric Castle Music Festival every year, Banffy Castle in Bontida is a ruin today. However, visitors can still explore the grounds and discover why it’s called “Versailles in Transylvania”.

Named after the Banffy family, who built the baroque-style castle in the 18th century, the castle fell into ruin when it was used as a hospital during WWII. It’s said souls of soldiers that died here haunt the castle.

If you come, you can explore some rooms inside the castle, enjoy a walk on the green grass around the year, and get lost in the forest on the lake.

Based in Bucharest? Check out These Great Day Trips from Bucharest!

It is the largest fortified church in Southeastern Europe, and was built in 13th century by Teutonic knights. Being so close to the city, it can be included in any day trip from Brasov. Besides the church inside the citadel, you can also visit the rooms in the surrounding wall to see what defensive systems looked like back then. 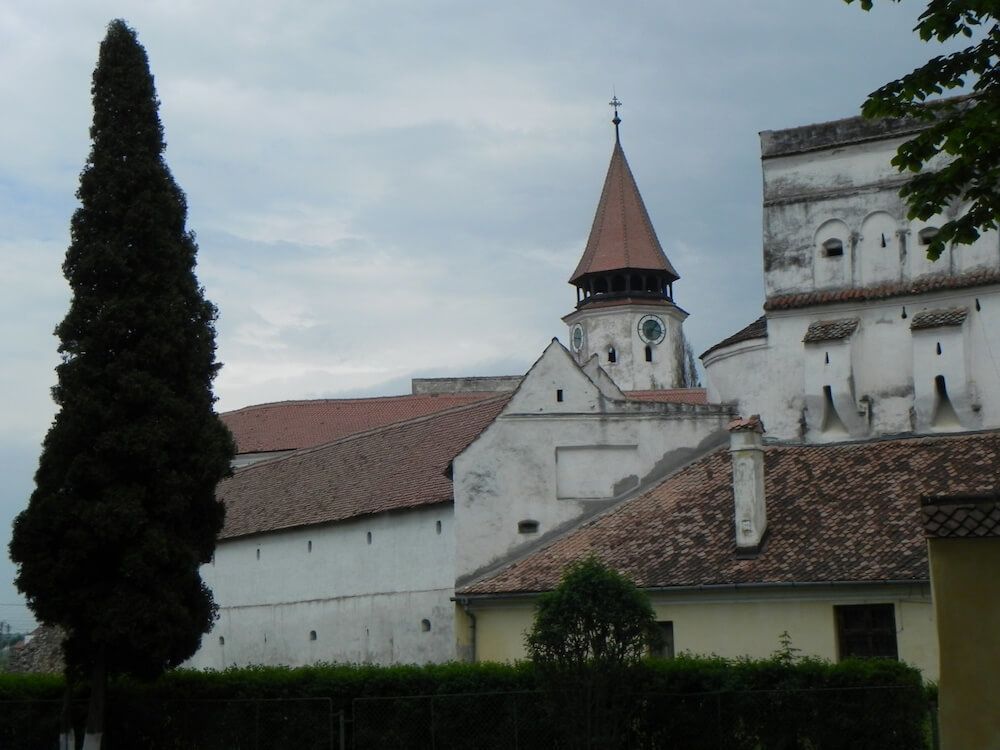 Scarisoara Cave, located in the Apuseni Mountains, hosts one of the largest underground glaciers in the world.

If you want to visit, you’ll need to drive uphill for roughly 10km off the national road along a narrow road. Once you park the car and walk around 15 minutes through the forest, you’ll arrive at the ticket station. From there, the glacier is accessible by descending on an iron ladder.

Inside the cave the temperature is constant, around 0 degrees Celsius. During summer, visitors will need winter clothes when they get there. It’s not a comfortable experience for the body, but what you will find here justifies the effort! 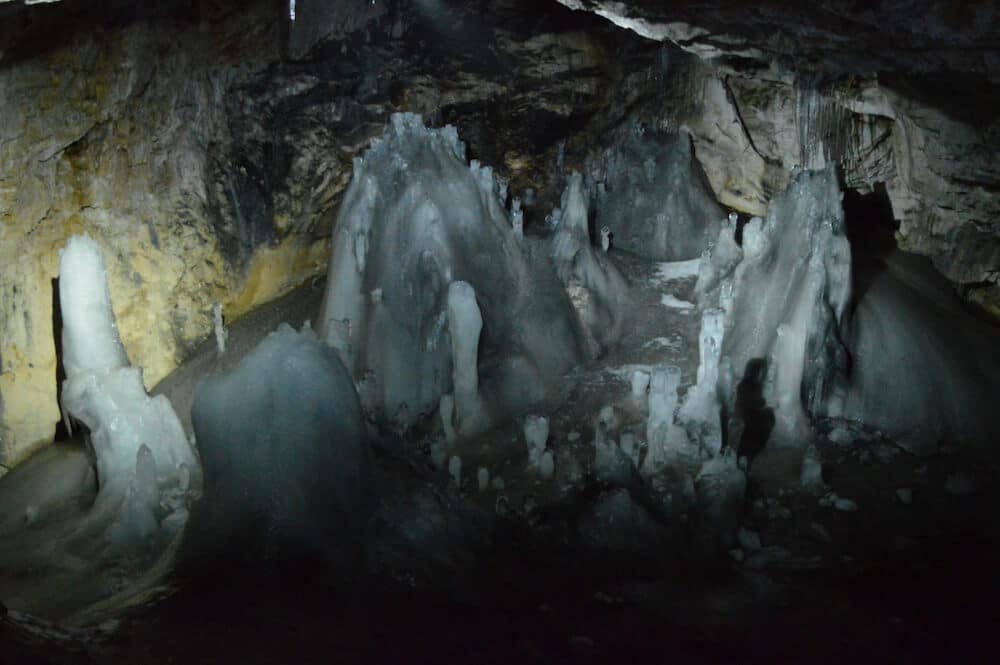 Formed after the ceiling of a cave collapsed, God’s Bridge in Ponoarele (southwest Romania) is the only natural bridge used for traffic in the world.

A national road passes over the bridge. If you want to explore, get out of the car and do so on foot. You can go under the bridge, and explore a little cave nearby. 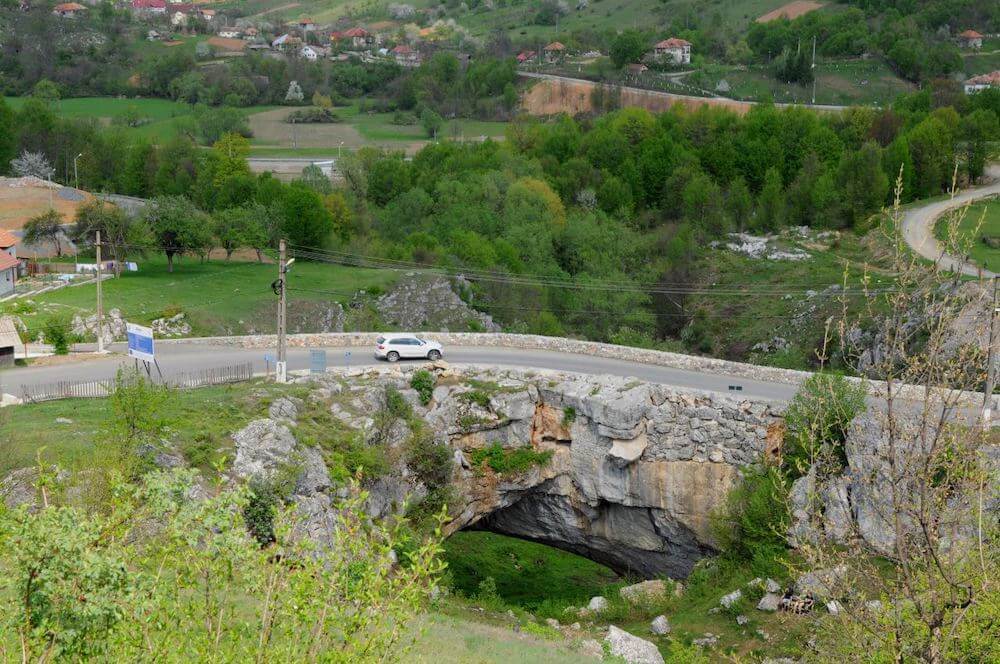 Densus Church is the oldest church in Romania that still hosts church services. It was built in the 13th century using stone from Ulpia Traiana Sarmizegetusa, the former Dacian capital after the Romans invaded Dacia.

Historians believe it sits on the site of an old Dacian and then Roman temple, due to its unusual architecture. It is not easily accessible, so prepare for a long road if you want to see it. 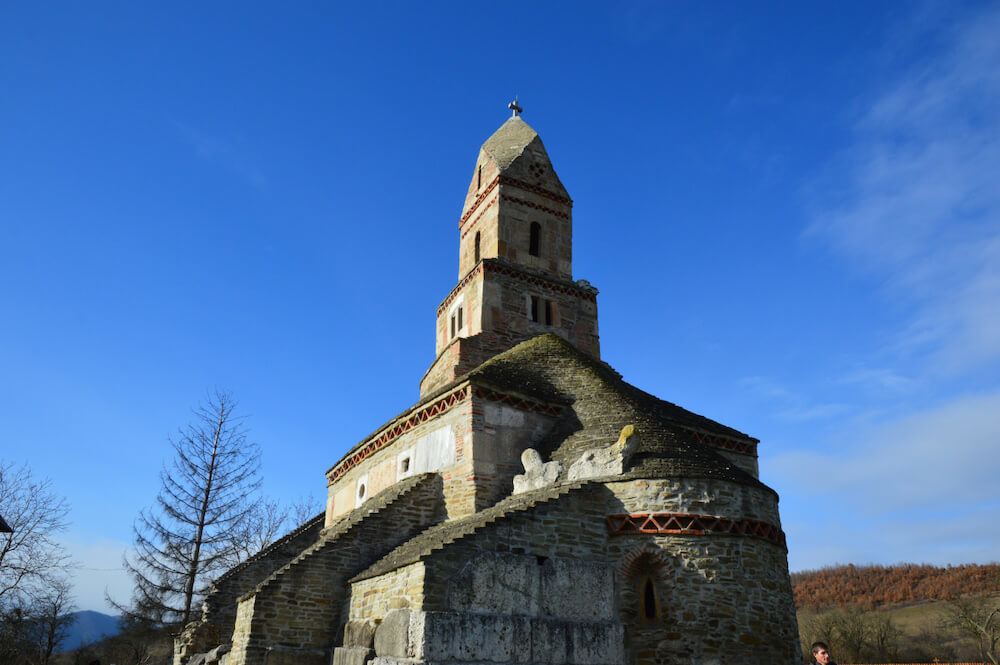 Head a few kilometres outside Bucharest, and you’ll find nature at its best. The Neajlov Delta is a wild natural area that’s very well preserved.

If you want to see wild birds, paddle around, and enjoy silence, the Neajlov Delta is a great choice. Spending half-a-day here will be enough to recharge your batteries!

Once you’re in the area, you can also visit the Comana Monastery built by Vlad Tepes (aka: Vlad the Impaler).

The most terrifying castle in Romania is the Iulia Hasdeu Castle in Campina. It was built by Iulia’s father, Bogdan Petriceicu Hasdeu, after his daughter died at the age of 19.

According to Bogdan, Iulia actually designed the castle after her death! She visited him from the great beyond and told him how the castle should  look.

After you visit the building, you might get the feeling it doesn’t quite belong to this world.

Use the Search Box Below to Book Your Romania Hotels!

The Transfagarasan is the best-known road in Romania, but there are other beautiful roads that cross the mountains and offer spectacular views.

One of these roads is Transbucegi.

Starting near Sinaia, the Transbucegi ascends the Bucegi mountains. At the top, it splits in two different roads: one that takes you to Babele, on the plateau, and another one that descends to Bolboci lake and Ialomicioara cave. Both are lovely, so feel free to pick whichever!

For the more adventurous traveler, off road adventures can be organized on this drive!

Note, the Transbucegi is not as well-traveled as the Transfagarasan and it does not have an official season. Usually during winter it’s covered in snow, and therefore isn’t accessible. Sometimes it’s closed also during summer due to weather conditions. The views are great, so it’s worth the effort. But ask around to make sure it’s open before you head out. 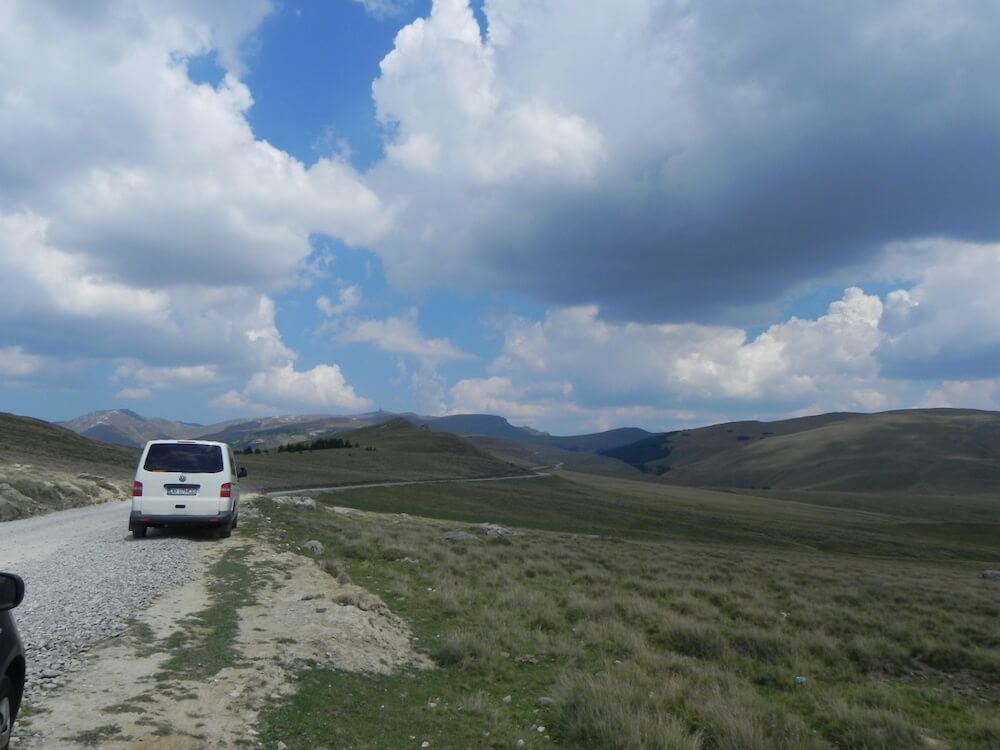 The Seven Ladders Canyon hike is a beautiful and accessible hike, even for those that aren’t that experienced. The hike takes you along a trail into the canyon, and then continues through the canyon.

Starting in Timisu de Jos, near Brasov, a 30-minute walk through the forest takes you to the entrance of the canyon. You’ll then follow the seven ladders – a cross between a staircase and a ladder, in terms of steepness – which take you through the canyon, passing lovely small waterfalls along the way (without getting wet).

To return to the starting point there are 2 options: walking or zip line!

This list of lesser known places to visit in Romania includes something for everyone! Natural attractions, old castles and mysteries that are begging to be explored. And these are only 10 of them. Romania hides many other surprises. Visit with your heart open, eager to discover, and Romania will offer you more than you can imagine.

Where will you go on your trip to Romania?

Pin This 10 Lesser Known Places to Visit in Romania Post! 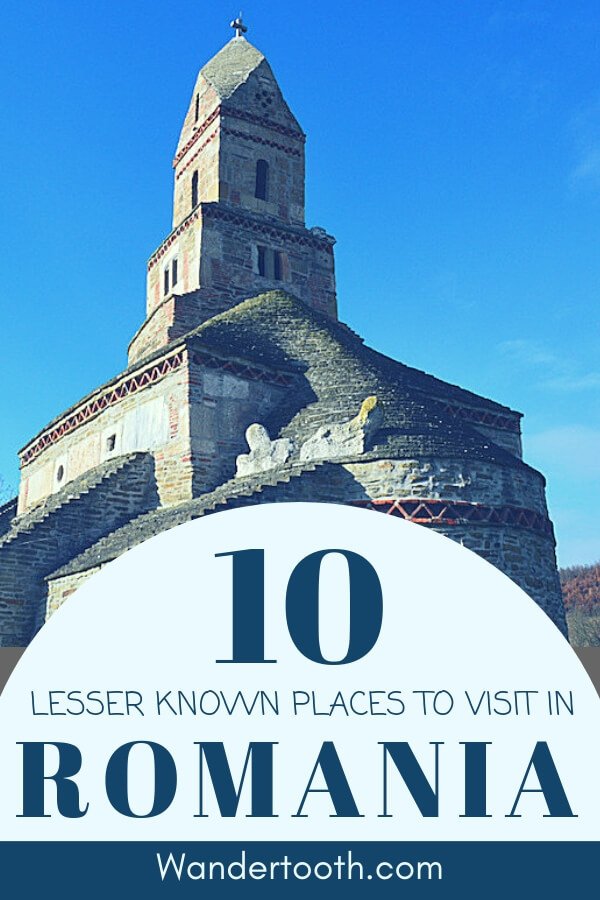