Skip to content
Home » Europe » England » Things to do in York England: How to Spend a Perfect Weekend in York
This post contains affiliate links. Learn more.
149 shares

Our guide to spending a great city break in York England. Read the best things to do in York England and enjoy our weekend itinerary to this historic city.

Disclosure: This things to do in York England post contains affiliate links. That means we earn a commission when you use the links on this site to book a hotel, buy your travel insurance, etc.. If you’d like to learn more about how this works, you can read more under our Disclaimer page.

This is a guest post by Sinead Camplin from mapmadememories.com

York is a perfect destination for a weekend break. The historic city is only two hours by train from London and three hours from Edinburgh, so the city is an ideal stop on a journey between England and Scotland.

York is an attractive and rather compact city. You can easily cover the principal sights on foot. Since there are plenty of things to do in York England, make sure you pack comfortable shoes!

Day 1: Things to do in York, England

Start Your Visit at York Minster

Start your weekend by visiting the beautiful York Minster. This majestic, gothic cathedral lies at the heart of York and dominates the city’s skyline. Regulations mandate the York Minster is the tallest building within the city walls.

Constructed between the 12th and 15th Century, the York Minster is magnificent inside and out.

You can wander the cathedral yourself or join one of the excellent daily tours. Knowledgeable volunteers give the tours, and they’ll help you discover some of the coolest facts and most interesting stories about the place.

Marvel at the enormous Great East Window – which is the largest expanse of stained glass in England – and the ornately decorated Chapter House. Descend into the eerie, atmospheric Crypt and explore the Undercroft Museum. Visitors with a head for heights can climb the 275 steps of the Minster’s central tower for an incredible bird’s eye view over the city. Try to attend one of the daily services such as Evensong to hear the incredible Minster organ and choir.

After exploring the Minster, turn left and stroll toward College Street’s black and white 15th-century buildings for a coffee and a delicious cupcake. You’ll find plenty of little pavement (sidewalk) cafes here.

Visit the Treasurer’s House: One of York’s Hidden Gems

Returning to York Minster, take the cobbled right-hand lane around the back of the church towards pretty Deans Park and the Treasurer’s House.

The Treasurer’s House is a 17th-century townhouse. It’s tucked behind the Minster on a quiet cobbled lane. England’s’ National Trust charity owns the house, and an eclectic collection of art and furnishings fill its rooms.

You can also explore the cellar (allegedly one of the most haunted sites in York) and the old servants quarters in the attic. On a sunny day, the tranquil gardens are wonderful to explore.

Head to the Museum Gardens and the Yorkshire Museum

The excellent Yorkshire Museum at the head of the park is also worth a visit. Interactive exhibits about York’s Viking and Roman heritage fill the museum. The museum is self-guided, but you can take tours of the gardens.

Leave the Museum Gardens by the River Ouse entrance and enjoy lunch at one of the riverfront restaurants and cafes.

Cross the bridge to access York’s medieval city walls. The walls are the longest city walls in England; they’re 2 ½ miles long and take around two hours to complete on foot.

The walls are narrow and unfenced in places, with some steep steps en route, but they provide you with fantastic views of York, particularly the section which winds behind York Minster. You’ll walk past the four imposing medieval stone gateways to the city (called bars) where you can exit the walls if you wish. Two of the bars house excellent exhibitions about King Henry VII and King Richard III.

You can leave the city walls at any of the bars to the city centre, where you’ll be spoilt for choice for dinner locations. For dinner with a view of the Minster, check out the restaurants and pubs of High Petergate.

Get Spooked on a Ghost Tour

After dinner and a rest, join one of the two-hour, walking ghost tours of the city, which run every night. An entertaining and engaging guide brings you to the haunted sites of York and relays the interesting (but often gruesome) stories of people who lived and died there.


Day 2: What to Do in York England

Start Your Day at the Shambles

Start your day early at The Shambles.

The Shambles is a short, narrow, cobbled shopping street, and is regularly voted as the Best Street in Britain. It’s also said to be the inspiration for Diagon Alley in the Harry Potter novels!

The atmospheric street is known for its lopsided, overhanging buildings, which once housed York’s butcher shops. If you look closely, you’ll see old meat hooks hanging from the shop windows above the wooden ledges where meat was once displayed.

The Shambles is a popular tourist spot and can get quite crowded, so it’s worth visiting early when it’s quiet.

Before leaving this area, pop into the lively Market behind The Shambles for a coffee stop.

If you like old architecture, the attractive streets around The Shambles are worth exploring.

Centuries-old buildings line High Petergate, Stonegate and Swinegate, and now serve as home to independent shops and boutiques. It’s a lovely area to wander around.

Snickets – narrow alleys which criss-cross the city – dot the area and are great to explore.

This is the perfect area to explore and get happily lost in York.

Have Lunch at Bettys Tea Room

Weave your way through the pedestrianised cobbled shopping streets to St Sampson’s Square. The impressive pink house dominating the square is home to the current Lord Mayor of York. This building is worth visiting for its fascinating kitchen alone! Opposite the Lord Mayors house, is the much loved local favourite Bettys Tea Rooms. Visiting Bettys is like stepping into a bygone era. Enjoy silver service on porcelain crockery from bow tied waiting staff. Indulge in a Yorkshire classic, a delicious Fat Rascal, a type of cherry and sultana rock cake. Bettys is a very popular venue and usually has a queue outside.

A guild of York’s citizens built this beautiful 14th-century timber-framed building, and York’s merchants have used it as a meeting place for over 600 years.

Visitors can explore the idyllic gardens and take an audio tour of the building or simply enjoy a cup of Yorkshire tea in the charming cafe.

The Jorvik Viking Centre is in nearby Coppergate, and is one of York’s most popular tourist attractions. Jorvik (as it’s referred to by locals) is the Norse name for York.

The highlight of the museum is a historical cab ride through a life-size replica Viking village complete with sounds and smells.

A one-minute walk from Jorvik is the gorgeous Fairfax House, another of York’s hidden gems. Fairfax House is a splendid Georgian townhouse. It’s fully furnished in a historical style, as it would have been 250 years ago. It’s well worth exploring.

Continue through Coppergate to reach Clifford’s Tower, the impressive remains of a Norman keep on an artificially-built hill adjacent to a large city centre car park.

Steep stairs lead up to the English Heritage-owned open keep where small exhibits detail life in the keep during Norman and medieval times. A further narrow stone staircase leads to the open escarpment with fantastic (but windy) 360-degree views of York.

York Castle Museum is opposite Clifford Tower and is my favourite museum in York. There is so much to see!

The museum explores life in York in more recent times. A full-size, cobbled street from the Victorian era with shops, a bank and a schoolroom is the highlight of the museum. You can enter some of the shops and meet the ‘shopkeepers’ who explain what life was like in Victorian York.

Part of the museum was once used as the city jail. Today different cells use holograms of actors to tell the stories of the prisoner who previously inhabited the cells, including the famous highwayman Dick Turpin.

After a full day of sightseeing, stroll along the delightful riverbank along the River Ouse. The waterfront is popular with joggers and walkers and is a great spot for a bit of people watching! You can rent a Little Red Boat for a one-hour self-drive trip on the river or join a sightseeing cruise boat.

End your day with a drink and dinner in one of the riverfront pubs.

York is a wonderful city with many varied attractions and activities. It hosts a variety of festivals ranging from the history-slanted Roman and Viking Festivals to the annual Food and Drink. There are even chocolate, comedy, and theatre festivals – something for everyone.

There are so many things to do in York England for young and old – there is is always something on! 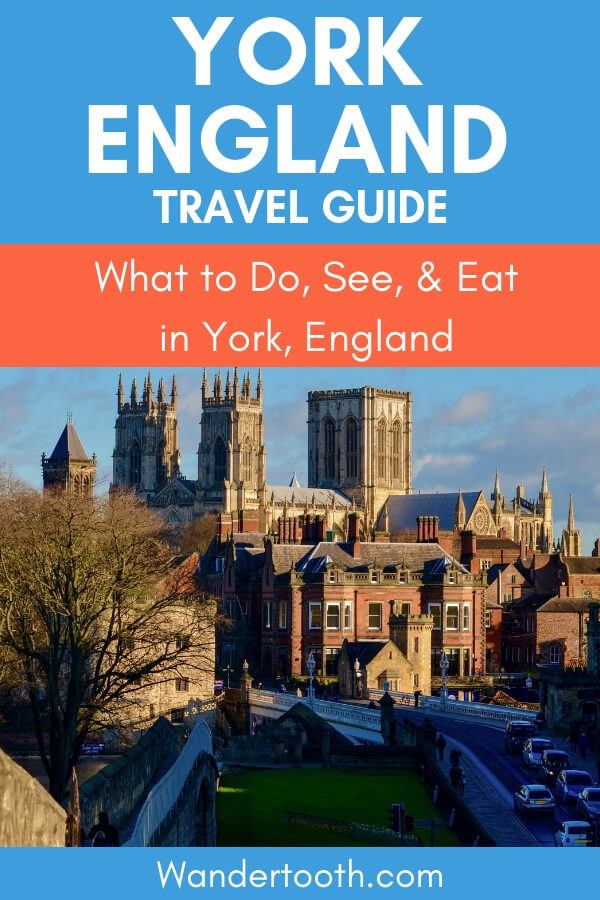