Disclosure: This website contains affiliate links. That means we earn a commission when you use the links on this site to book a hotel, buy your travel insurance, shop for travel essentials, etc.. You don’t pay anything extra. If you’d like to learn more about how this works, you can read more under our Disclaimer page. Please note, we were guests of Viking River Cruises during our Passage to Eastern Europe trip.

As with so much in Hungary, it begins with alcohol. Wine, to start: red and white. And then Palinka, the rocket fuel/fruit brandy that finds its way into every social event in Hungary, no matter the time of day. 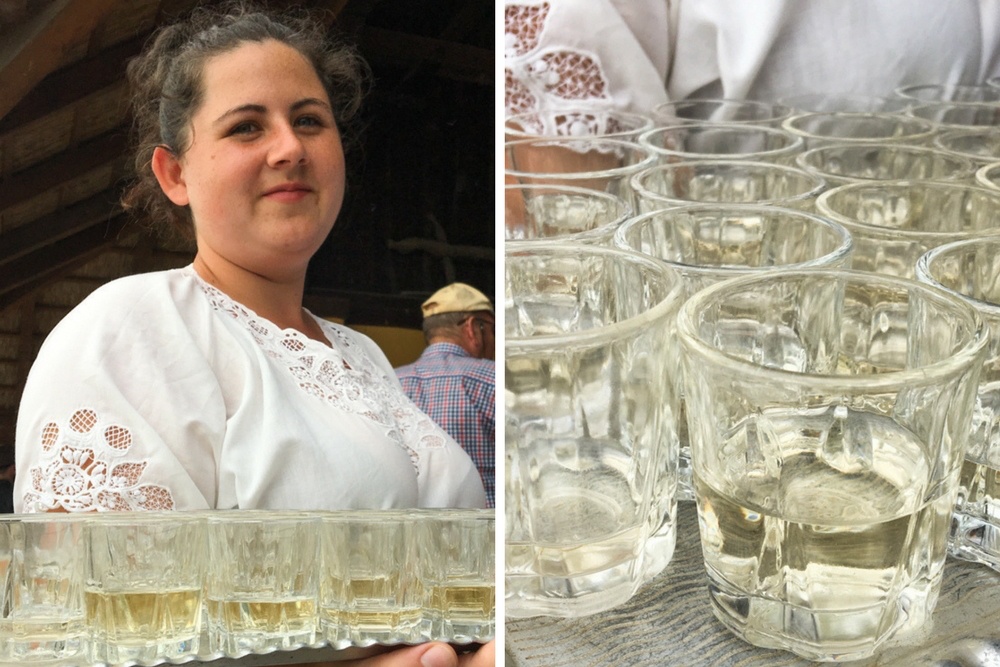 It’s a little past 9am, and we’re at Bakod Pustza, one of the most prominent horse ranches in the country, and the first stop on our Passage to Eastern Europe river cruise with Viking Cruises.

Hungarians, our guide explains, are an equestrian people. More than 1,000 years ago, Magyar tribes made their way across the central Asian steppe to Hungary, conquering the Carpathian basin and establishing the Kingdom of Hungary among a sea of Slavic neighbours. Those who settled the country’s Puszta  — Hungary’s Great Plains — slowly developed an agricultural and equestrian culture unlike anywhere else in the world.

And Viking brought us here to experience it, as the first shore excursion on our 11-day Budapest to Bucharest itinerary. 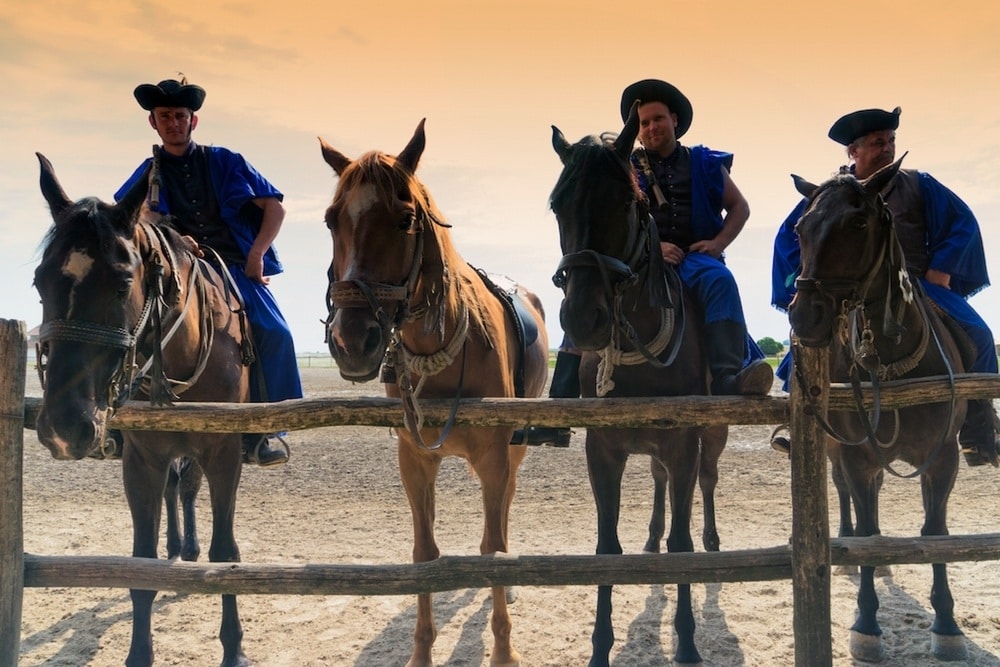 After the fall of communism, horse farms and clubs popped up across the country as Hungarians set about rediscovering their centuries-old equestrian and agricultural roots.

Today, Hungarian cowboys — csikós — train here, learning skills to conquer the plains like their ancestors and tend to the unique livestock of this area. Most notably, visitors can see the majestic Hungarian Grey Cattle, a species which until now I’ve only known from the menus of Budapest’s burger joints, and the curly-haired Mangalica pigs, which you can see in photographs hanging above butcher stalls in Budapest (and in the sausages they sell). 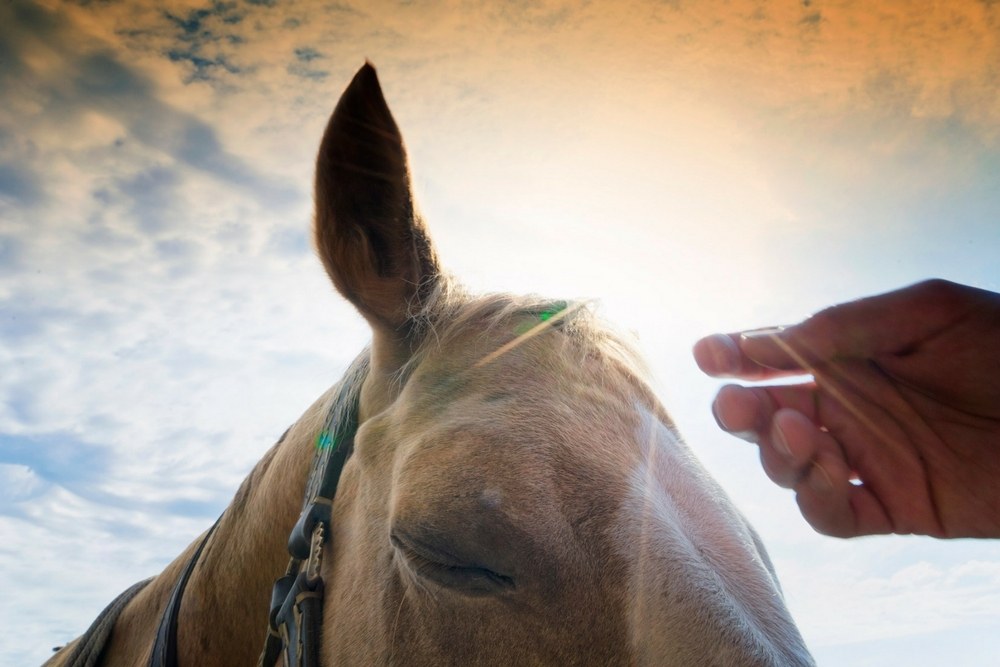 The show begins as four Hungarian Grey cattle thud to life, massive silver horns curving toward the sky. The species is only semi-domesticated, the announcer explains, which means they’re also still semi-wild. And seeing their long, sharp horns crowning their skull, it’s clear we never want to be on the wrong end of their wild side.

Standing tall on the cart these beasts pull, a csikó demonstrates how to control the cattle, making their lumbering selves swerve left and right in tight circles, showcasing their power to the visitors. 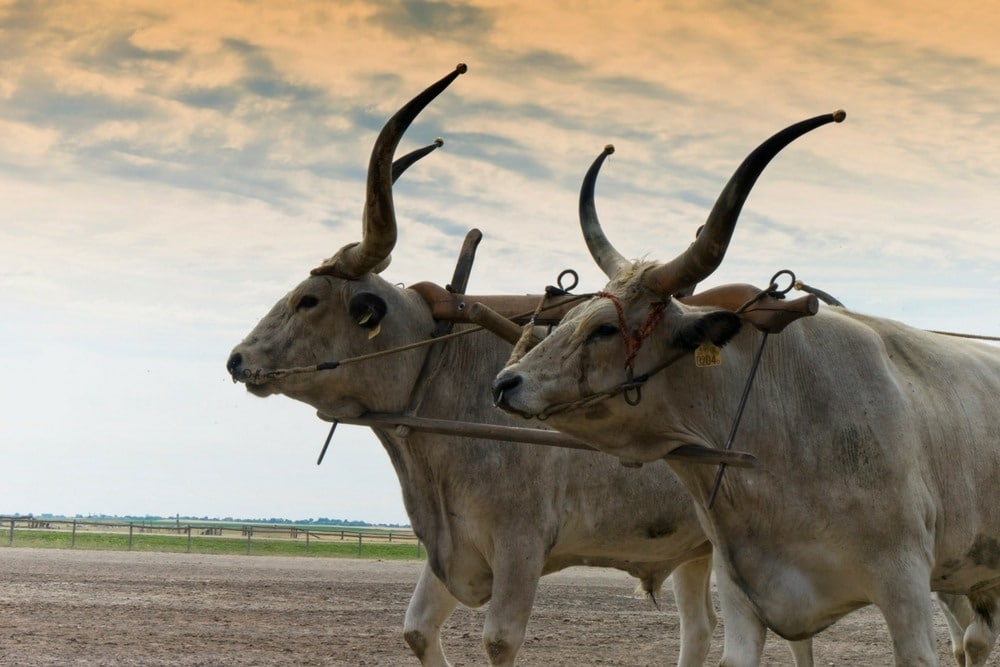 And then the real show begins, as the csikós begin to show off the equestrian skills for which they’re famous.

Back when these traditions started, csikós’ impressive skills were a matter of life or death. Now, Hungarian Cowboys hone their skills as an investment in preserving the long, proud heritage of this part of Hungary: the Pustza. 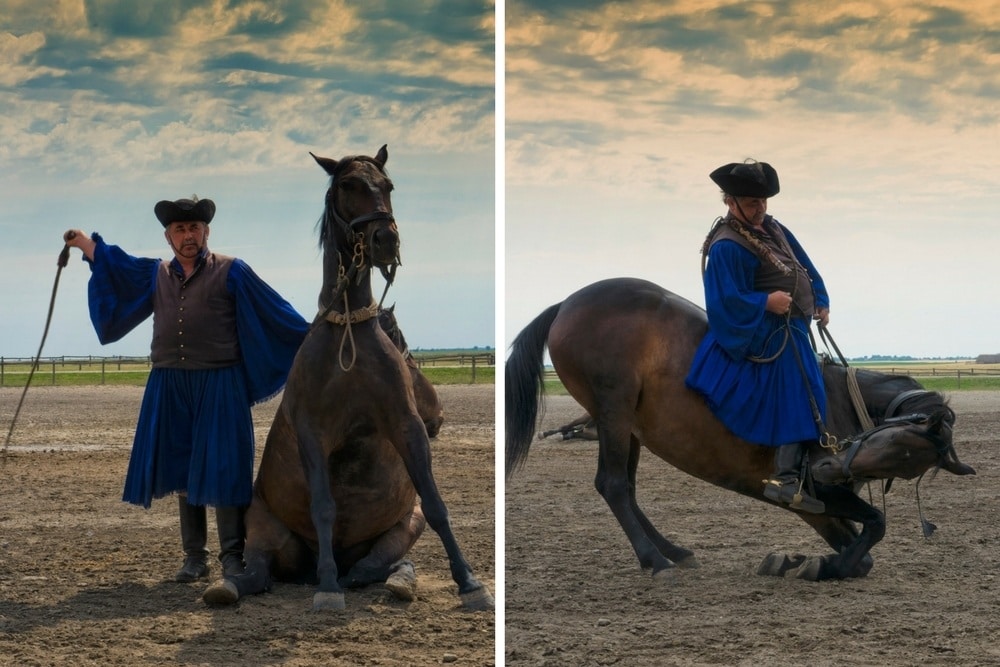 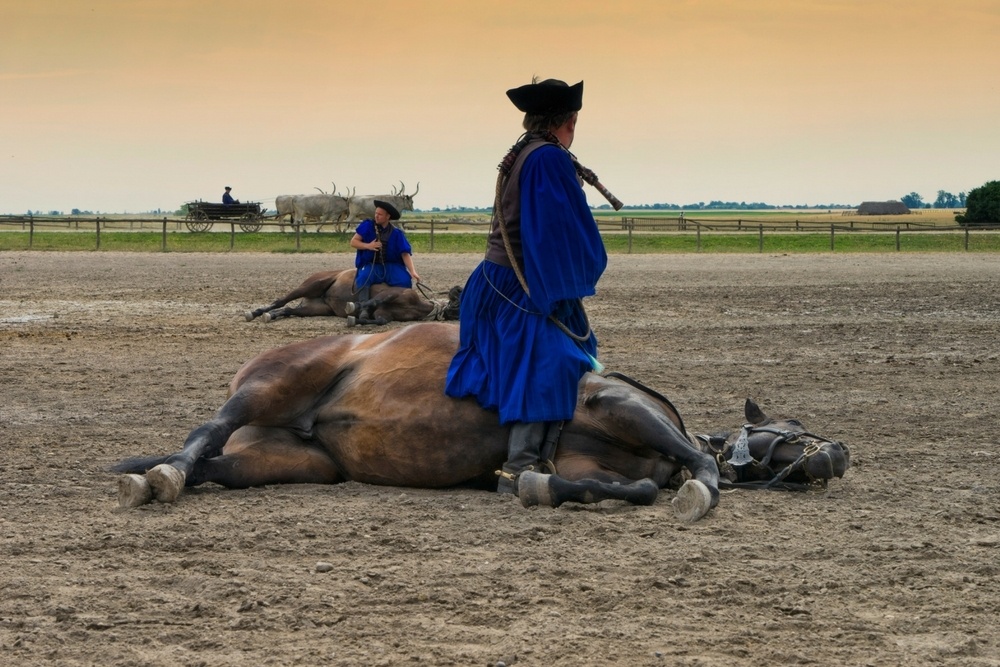 Finally, the show reaches its crescendo, as thecsikós demonstrate their most impressive riding skills: 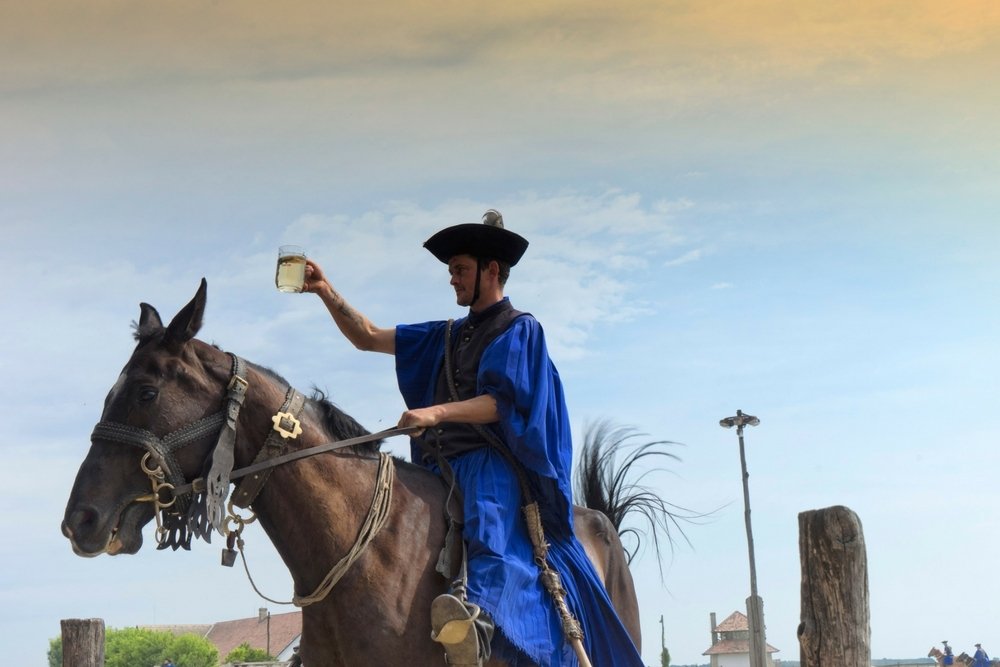 Carrying a full mug of drink while galloping… 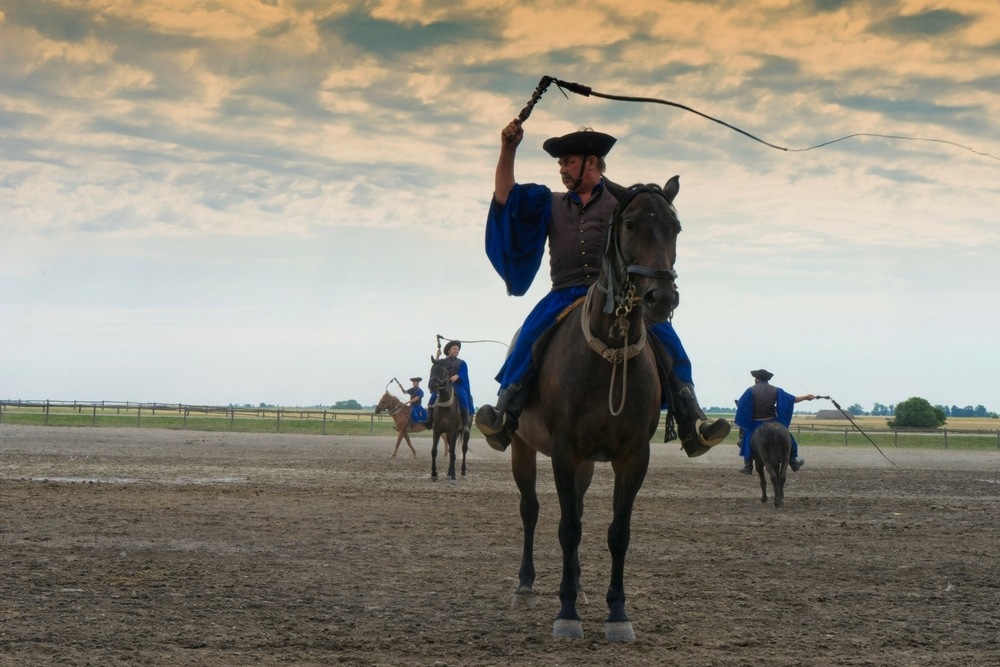 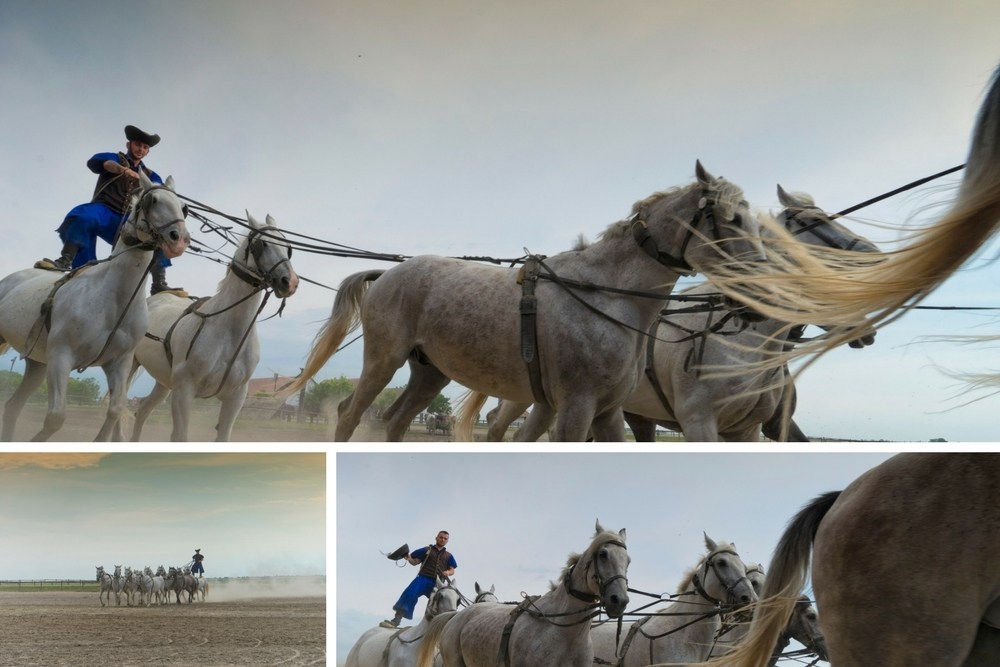 And standing tall on horses in full gallop — the most death-defying feat of the show. Spectacular.

We visited Bakod Pustza as guests of Viking River Cruises on their Passage to Eastern Europe river cruise. This 11-day, 5 country cruise took us from Budapest to Bucharest, and included stops and excursions in Hungary, Croatia, Serbia, Bulgaria and Romania. At the time of writing, sailings are still available for 2017, with 2018 sailings starting on March 14. 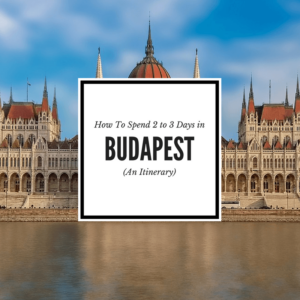 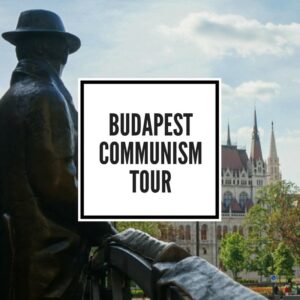 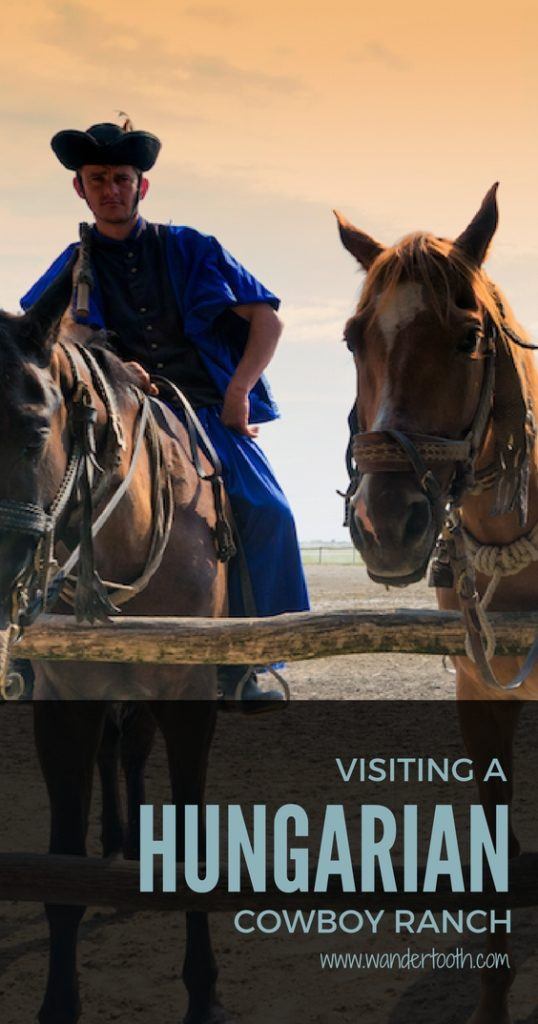